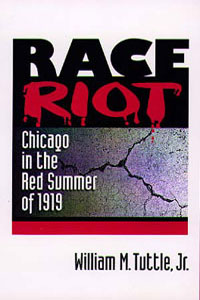 A vivid analysis of a volatile time in Chicago history

"The origins of the Chicago race riot of 1919 are to be found, not in high-level policy, but in gut-level animosities between black and white people who were generally inarticulate and presentist-oriented, and who did not record their motivations or feelings for posterity. . . To explain the Chicago riot, this evidence has to be found; and though such evidence is not abundant by any means, it does exist."--From the preface

"Vividly written. A fine study with surprising appeal for the lay reader."--Publishers Weekly

"A fascinating and important study, as well researched and written and thought out as any this reviewer has seen in recent years."--Gilbert Osofsky, Journal of American History

"One cannot fully understand the Chicago riot of 1919 or, indeed, the post-World War I racial strife without reading this important work."--John Hope Franklin

"This book has more lives than a cat because its feet are firmly planted on the bedrock issues of race and class, its analysis goes to the quick of urban-industrial life in the early twentieth century, and its vivid narrative captures the tumultuous riot without ever losing scholarly balance. A quarter century after it was first published, it has still not been excelled."--Alan Dawley, author of Struggles for Justice: Social Responsibility and the Liberal State

William M. Tuttle is a professor emeritus of history and American studies at the University of Kansas. His books include "Daddy's Gone to War": The Second World War in the Lives of America's Children.