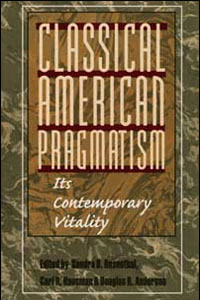 This collection provides a thorough grounding in the philosophy of American pragmatism by examining the views of four principal thinkers—Charles S. Peirce, William James, John Dewey, and George Herbert Mead—on issues of central and enduring importance to life in human society. Pragmatism emerged as a characteristically American response to an inheritance of British empiricism.

Presenting a radical reconception of the nature of experience, pragmatism represents a belief that ideas are not merely to be contemplated but must be put into action, tested and refined through experience. At the same time, the American pragmatists argued for an emphasis on human community that would offset the deep-seated American bias in favor of individualism. Far from being a relic of the past, pragmatism offers a dynamic and substantive approach to questions of human conduct, social values, scientific inquiry, religious belief, and aesthetic experience that lie at the center of contemporary life. This volume is an invaluable introduction to a school of thought that remains vital, instructive, and provocative.