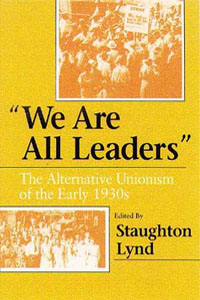 "We Are All Leaders"

The Alternative Unionism of the Early 1930s

Contains the Bryant Spann Memorial Prize in Literature for 1997, an award-winning essay, "The Very Last Hurrah" by Eric Leif Davin

A different vision of worker power

This collection of articles delves into the little-known community-based unionism of 1930s. Worlds apart from bureaucratic business unions like the AFL-CIO, these organizations emerged from workers involved in many kinds of labor, from African American nutpickers in St. Louis to chemical and rubber workers in Akron, and from bootleg miners in Pennsylvania to tenant farmers in the Mississippi Delta.

The contributors draw on eyewitness interviews, first-person narratives, trade union documents, and other primary sources to describe experimental forms of worker activism during the period. This alternative unionism was democratic, deeply rooted in mutual aid among workers in different crafts and work sites, and politically independent. The key to it was a value system based on egalitarianism. The cry, "We are all leaders!" resonated among rank-and-file activists. Their struggle, though often overlooked by historians, has much to teach us about union organizing today.

Staughton Lynd taught American history at Spelman College and Yale University. In 1964, he worked as director of Freedom Schools during Mississippi Freedom Summer and later became an attorney. His books include Doing History from the Bottom Up: On E.P. Thompson, Howard Zinn, and Rebuilding the Labor Movement from Below and Intellectual Origins of American Radicalism.