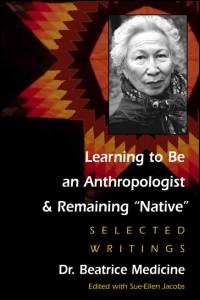 Learning to Be an Anthropologist and Remaining "Native"

This prodigious volume represents a landmark assemblage of the significant work of the legendary anthropologist and Native American intellectual Beatrice Medicine.

For half a century, Dr. Medicine has defied stereotypes, racism, and sexism in her life and work while combating the reductive, patronizing views of Native Americans perpetuated by mainstream anthropologists. This retrospective collection reflects her unswerving commitment to furthering Native Americans' ability to speak for themselves and deal with the problems of contemporary life.

Learning to Be an Anthropologist and Remaining "Native" includes Medicine's clear-eyed views of assimilation, bilingual education, and the adaptive strategies by which Native Americans have conserved and preserved their ancestral languages. Her discussions of sex roles in contemporary Native American societies encompass homosexual orientation among males and females and the "warrior woman" role among Plains Indians as one of several culturally accepted positions according power and prestige to women. The volume also includes Medicine's thoughtful assessments of kinship and family structures, alcoholism and sobriety, the activism implicit in the religious ritual of the Lakota Sioux Sun Dance, and the ceremonial uses of Lakota star quilts.

"The Native American is possibly the least understood ethnic minority in contemporary American society," Medicine observes. Her decades of deliberate, generous, dedicated work have done much to reveal the workings of Native culture while illuminating the effects of racism and oppression on Indian families, kinship units, and social and cultural practices.

"Dr. Medicine brings to an astounding array of topics a deep understanding based on her dual status as insider and anthropologist. Hers is a unique voice, full of wisdom and compassion. These essays are required reading for anyone interested in contemporary Native Americans."--Raymond DeMallie, editor of North American Indian Anthropology: Essays on Society and Culture

"There is no other scholar with Medicine's solid Indian roots, activism, and scholarly achievements and competence. This volume brings together her most important writings on Native American experience and issues. Thoroughly grounded in an Indian woman's experience but uniquely filtered through sophisticated anthropological training, these highly literate essays are a pleasure to read."--Alice B. Kehoe, author of North American Indians: A Comprehensive Account

"Bea Medicine has long been recognized as one of the major American Indian intellectuals of our time, and certainly as a foremost authority on Native American women. Her unique voice will now receive the recognition which is long overdue, and her major place in both anthropology and Native American Studies will become crystal clear."--Jack D. Forbes, author of Africans and Native Americans: The Language of Race and the Evolution of Red-Black Peoples

Dr. Beatrice Medicine, professor emeritus of anthropology at California State University at Northridge, is the author of Native American Women: A Perspective and coeditor of The Hidden Half: Indian Women on the Plains. Sue-Ellen Jacobs is a professor of women's studies at the University of Washington at Seattle. Her books include Two-Spirit People: Native American Gender Identity, Sexuality, and Spirituality. Ted Garner, Beatrice Medicine's son, is a sculptor who lives in Chicago. He holds a B.F.A. from the Kansas City Art Institute. Faye V. Harrison is a professor of anthropology at the University of Tennessee at Knoxville. Her books include African-American Pioneers in Anthropology.