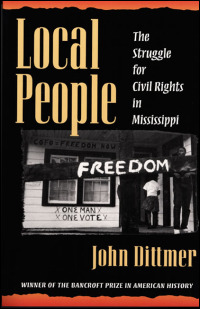 Winner of the Bancroft Prize, the Lillian Smith Book Award, the Mississippi Historical Society McLemore Prize, the Herbert G. Gutman Prize and the Gustavus Myers Center for Study of Human Rights Outstanding Book Prize. Publication of this book was supported by a grant from DePauw University, Greencastle, Indiana

For decades, the nation's most racially repressive state fought bitterly and violently to maintain white supremacy. John Dittmer traces the monumental battle waged by civil rights organizations and local people, particularly courageous members of the black communities who put their lives on the line to establish basic human rights for all citizens of the state.

Local People tells the whole grim story in depth for the first time, from the unsuccessful attempts of black World War II veterans to register to vote to the seating of a civil rights-oriented Mississippi delegation at the 1968 Democratic National Convention. Particularly dramatic--and heartrending--is Dittmer's account of the tumultuous decade of the sixties: the freedom rides of 1961, which resulted in the imprisonment at Parchman of dozens of participants; the violent reactions to protests in McComb and Jackson and to vote registration drives in Greenwood and other cities; the riot in Oxford when James Meredith enrolled at Ole Miss; the cowardly murder of longtime leader Medger Evers; and the brutal Klan lynchings of civil rights workers James Chaney, Michael Schwerner, and Andrew Goodman during the Freedom Summer of 1964.

Dittmer looks closely at the policies and actions of the Kennedy administration, which, bowing to Mississippi's powerful senators John Stennis and James Eastland, refused to intervene even in the face of obvious collusion among local officials and vigilantes.

Through oral history accounts readers will come to know many of the local people and grassroots organizers who worked, and in some cases gave their lives, for the cause of civil rights. Among those whose stories are told are Fannie Lou Hamer, the Sunflower County sharecropper who helped found the Mississippi Freedom Democratic party; Victoria Gray and Annie Devine, who with Mrs. Hamer challenged the seating of Mississippi's congressional delegation in 1965; Bob Moses of SNCC, the most significant "outsider" in the movement; Hollis Watkins, a SNCC field secretary from southwest Mississippi; and Dave Dennis, a freedom rider from New Orleans who became CORE's Mississippi field secretary in 1962.

In the final chapter, Dittmer charts the transformative strength of the Mississippi movement while pointing out the limitations of its hard-earned reforms. If black Mississippians did not achieve all their goals, he reminds us, they nonetheless managed to bring about extraordinary changes in a state that had been locked in the caste system for nearly a century.

"A gripping portrait of largely forgotten civil rights workers who forged racial change in the face of violence and murder. . . . Redefines the roles of national leaders who were forced to act by the unswerving determination of local people."--William Ferris, New York Times Book Review

"At once the movement's history in microcosm and a powerful story in its own right."--Jonathan Yardley, Washington Post Book World

"Dittmer's stirring history of the struggle for racial justice in Mississippi tells the story in all its grim, often shocking detail."--Publishers Weekly

"The definitive analytical history of the black freedom movement in the nation's most recalcitrant state."--Julian Bond

John Dittmer is a professor emeritus of history at DePauw University. His books include Black Georgia in the Progressive Era, 1900-1920 and The Good Doctors: The Medical Committee for Human Rights and the Struggle for Social Justice in Health Care. 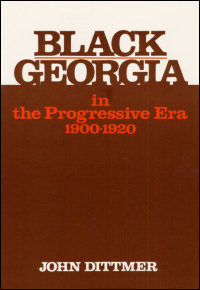