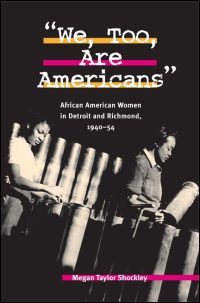 "We, Too, Are Americans"

During World War II, factories across America retooled for wartime production, and unprecedented labor opportunities opened up for women and minorities. Megan Taylor Shockley examines the experiences of the African American working women in two capitals of industry--Detroit, Michigan, and Richmond, Virginia--during the war and the decade that followed.

As demands on them intensified, these working women became increasingly aware of their key role in the war effort. African Americans among them leveraged their indispensability to push for equal employment, welfare and citizenship benefits, fair treatment, good working conditions, and other considerations. Shockley shows that as these women strove to redefine citizenship and backed up their claims to equality with lawsuits, sit-ins, and other forms of activism. In the process, they forged the tools that civil rights activists would continue to use in the years to come.

"Shockley amply demonstrates that African American women, regardless of class, together contributed a profound sense of miltancy and urgency to the emerging civil rights movement."--Journal of Southern History

"Recognizes women in World War II and the early Cold War for their participation in civil rights actions and their expansion of the themes of democracy and a 'Double Victory' for rights at home and abroad, , , , A valuable resource for the interpretation of civil rights in this period [and] supports the view that this period was most important as an attitudinal crucible of the civil rights movement."--Journal of American History

Megan Taylor-Shockley is a professor of history at Clemson University. She is the author of The Captain’s Widow of Sandwich: Self-Invention and the Life of Hannah Rebecca Burgess, 1834-1917.