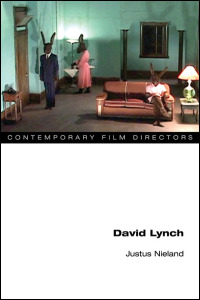 A key figure in the ongoing legacy of modern cinema, David Lynch designs environments for spectators, transporting them to inner worlds built by mood, texture, and uneasy artifice. We enter these famously cinematic interiors to be wrapped in plastic, the fundamental substance of Lynch’s work. This volume revels in the weird dynamism of Lynch’s plastic worlds. Exploring the range of modern design idioms that inform Lynch’s films and signature mise-en-scène, Justus Nieland argues that plastic is at once a key architectural and interior design dynamic in Lynch’s films, an uncertain way of feeling essential to Lynch’s art, and the prime matter of Lynch’s strange picture of the human organism.

Nieland’s study offers striking new readings of Lynch’s major works (Eraserhead, Blue Velvet, Wild at Heart, Mulholland Dr., Inland Empire) and his early experimental films, placing Lynch’s experimentalism within the aesthetic traditions of modernism and the avant-garde; the genres of melodrama, film noir, and art cinema; architecture and design history; and contemporary debates about cinematic ontology in the wake of the digital. This inventive study argues that Lynch’s plastic concept of life--supplemented by technology, media, and sensuous networks of an electric world--is more alive today than ever.

"Offers a great deal to those beginning their investigations into David Lynch, as well as providing a stream of new insights and critical angles for those more familiar with the director's work. Nieland has not only got inside David Lynch's house: he has exposed its interior to expert interpretation."--Senses of Cinema

"Justus Nieland's study is something of a revelation. . . . it breathes new life into a canon that had appeared to have reached a point of critical exhaustion. . . . an impressive achievement."--Screening the Past

"A stunning piece of work. One of the most provocative, erudite, and elegantly written--not to mention persuasive--writings on Lynch I have seen. It is a much-needed volume and will contribute to Lynch criticism, but its reach is much wider; it will signal the arrival of a significant voice to the field. This is the book."--Akira Mizuta Lippit, author of Atomic Light (Shadow Optics)

Justus Nieland is an associate professor of English at Michigan State University, the author of Feeling Modern: The Eccentricities of Public Life, and the coauthor of Film Noir: Hard-Boiled Modernity and the Cultures of Globalization.