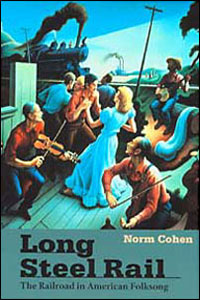 The largest, most authoritative source on railroad folksong

Impeccable scholarship and lavish illustration mark this landmark study of American railroad folksong. Norm Cohen provides a sweeping discussion of the human aspects of railroad history, railroad folklore, and the evolution of the American folksong. The heart of the book is a detailed analysis of eighty-five songs, from "John Henry" and "The Wabash Cannonball" to "Hell-Bound Train" and "Casey Jones," with their music, sources, history, variations, and discographies. A substantial new introduction updates this edition.

"Norm Cohen's anthology of railroad folksongs will delight anyone smitten with the romance of the rails."--Newsday

"Norm Cohen has not only filled a gap; he has applied mature scholarship, historical sensibility, enthusiasm, and love to produce a major work on folklore, folk song, and the railroads' pervasive impact on popular culture."--Railroad History "A delightfully readable book for any armchair railroad engineer."--Choice

Norm Cohen worked for the Chemical Kinetics Department at the Aerospace Corporation in Los Angeles. His books include American Folk Songs: A Regional Encyclopedia. He lives in Portland, Oregon, with his wife and son and teaches chemistry and folk music part time.