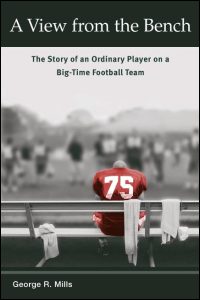 A View from the Bench

Being an average player on a dominant college football team

Recruited for his combination of size and speed, George Mills had the potential to become an outstanding college football player--but it never happened. A View from the Bench reveals the reality behind the glamour of college football and the tough experiences in the life of a benchwarmer.

Mills was a solid player who loved the game, but he had only one shot in nearly five years at making Nebraska's starting team. He found little time or energy left for academics after hours of drills, weight lifting, and team meetings. Now, with complete candor, Mills lays bare the true weight of emphasis in the "student-athlete" dichotomy.

Free from anger or malice, Mills tells of his struggle to come to terms with a sports career of "mediocrity." A View from the Bench is an honest reflection of the experiences of so many overlooked players. It will be meaningful to anyone who has watched or played competitive sports.

"I love the book! It takes me back to those pleasant days at Nebraska. I didn't realize I was so tough on George and the other defensive linemen. As he admits, he wasn't one of the outstanding players on the team, but he worked hard. . . . That's all a coach can ask. As a writer on college football he makes the first team."--Monte Kiffin, defensive coordinator for the 2003 Super Bowl-winning Tampa Bay Buccaneers

"It brought back the sounds, sights, smells, pain, and excitement of being an average football player in a big-time college football program. I was impressed by Mills' description of those seemingly endless practice sessions, of those fanatical coaches, of the dedication of that handful of teammates who had a genuine chance of making it in the pros, and the joys of being a big man on campus."--Stephen E. Ambrose, author of Band of Brothers: E Company, 506th Regiment, 101st Airborne: From Normandy to Hitler's Eagle's Nest

"No other book about the college athletic experience rings truer."--Benjamin G. Rader, author of American Sports

George R. Mills was defensive tackle at the University of Nebraska. He is now a sales broker at a real estate firm in Omaha and a former high school football coach.