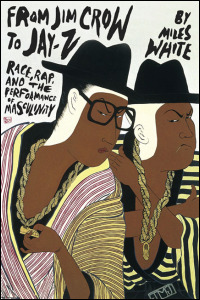 From Jim Crow to Jay-Z

Race, Rap, and the Performance of Masculinity

This multilayered study of the representation of black masculinity in musical and cultural performance takes aim at the reduction of African American male culture to stereotypes of deviance, misogyny, and excess. Broadening the significance of hip-hop culture by linking it to other expressive forms within popular culture, Miles White examines how these representations have both encouraged the demonization of young black males in the United States and abroad and contributed to the construction of their identities.

From Jim Crow to Jay-Z traces black male representations to chattel slavery and American minstrelsy as early examples of fetishization and commodification of black male subjectivity. Continuing with diverse discussions including black action films, heavyweight prizefighting, Elvis Presley's performance of blackness, and white rappers such as Vanilla Ice and Eminem, White establishes a sophisticated framework for interpreting and critiquing black masculinity in hip-hop music and culture. Arguing that black music has undeniably shaped American popular culture and that hip-hop tropes have exerted a defining influence on young male aspirations and behavior, White draws a critical link between the body, musical sound, and the construction of identity.

"[From Jim Crow to Jay-Z] takes a critical look at the portrayal of racialized machismo in modern America, and how hip-hop helps perpetuate stereotypical tropes about the African-American male. . . . Perfect for anyone who enjoys an intellectually stimulating and provocative read."--The Root

"By interrogating the cultural logic through which blackness and masculinity are constructed in our society, [White] opens up possibilities for more empowering forms of representation and identification both within popular culture and in the lived experiences of race, class and gender."--PopMatters.com

"Invaluable. . . . Provides a clear example of how interdisciplinary approaches to African American music and culture can provide future scholars with the tools to examine the ever changing and diverse identities within the community."--Black Grooves

"A captivating study of hardcore styles of hip-hop, masculinity and the performance of the body."--Ethnic and Radical Studies

"Unique in both approach and scope, this work adds a scholarly perspective to the popular literature that examines issues of black masculinity and hardcore hip-hop as performed by black and white rappers. An example of excellent scholarship that sets new standards for writing on this topic."--Portia K. Maultsby, coeditor of African American Music: An Introduction