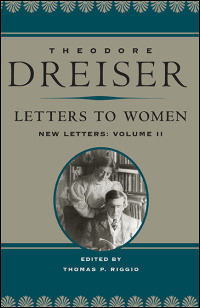 An intimate view of Theodore Dreiser's exchanges with women

Theodore Dreiser led a long and controversial life, almost always pursuing some serious question, and not rarely pursuing women. This collection, the second volume of Dreiser correspondence to be published by the University of Illinois Press, gathers previously unpublished letters Dreiser wrote to women between 1893 and 1945, many of them showing personal feelings Dreiser revealed nowhere else.

Here he both preens and mocks himself, natters and scolds, relates his jaunts with Mencken and his skirmishes with editors and publishers. He admits his worries, bemoans his longings, and self-consciously embarks on love letters that are unafraid to smolder and flame. To one reader he sends “Kisses, Kisses, Kisses, for your sweety mouth” and urges his needy requests: “Write me a love-letter Honey girl.” Alongside such amorous play, he often expressed his deepest feelings on philosophical, religious, and social issues that characterize his public writing.

Chronologically arranged and meticulously edited by Thomas P. Riggio, these letters reveal how wide and deep Dreiser’s needs were. He writes to Margaret Johnson, “You are beautiful & full of fine physical & mental strength & lust. Don’t waste the next ten years.” While living with Helen Richardson in California he wrote to Kirah Markham in New York, inquiring what she would do for him if he moved back. The volume also includes letters from his courtship of Sarah White.

Dreiser often discussed his writing in his letters to women friends, telling them what he wanted to do, where he thought he succeeded and failed, and seeking approval or criticism. Depending on his mood, he could call writing “a silly business. Artificial anthracite” or approvingly quote Shelley on the artist as the “unacknowledged legislator of the world.” These letters are by turns seductive, candid, coy, and informative, and they provide an intimate view of a master writer who knew exactly what he was after.

“Riggio’s admirable collection, assisted by useful footnotes, brings to light new and important information not only on Dreiser, but on the difficulties of earning a living as a writer in early twentieth-century America.” --TLS

“This edition fills a great empty spot in American letters. I know of no volume of correspondence organized in this way, concentrating on a male writer’s letters to the important women in his life. We hear a new voice from Dreiser here, his voice with women--intuitive, emotional, sympathetic, and understanding.”--James L. W. West III, editor of scholarly editions of Sister Carrie and Jennie Gerhardt

“This collection makes a truly significant contribution to the field, making available letters never before published. It provides an intimate, unfiltered exposure to Dreiser that simply cannot be replicated by a biographer. Any research library would need to own this book.”--Nancy Shawcrosss, curator of manuscripts at the Rare Book & Manuscript Library at the University of Pennsylvania