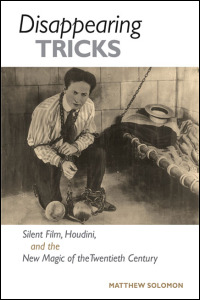 Silent Film, Houdini, and the New Magic of the Twentieth Century

Disappearing Tricks revisits the golden age of theatrical magic and silent film to reveal how professional magicians shaped the early history of cinema. While others have called upon magic as merely an evocative metaphor for the wonders of cinema, Matthew Solomon focuses on the work of the professional illusionists who actually made magic with moving pictures between 1895 and 1929.

The first to reveal fully how powerfully magic impacted the development of cinema, the book combines film and theater history to uncover new evidence of the exchanges between magic and filmmaking in the United States and France during the silent period. Chapters detailing the stage and screen work of Harry Houdini and Georges Méliès show how each transformed theatrical magic to create innovative cinematic effects and thrilling new exploits for twentieth-century mass audiences. The book also considers the previously overlooked roles of anti-spiritualism and presentational performance in silent film.

Highlighting early cinema's relationship to the performing body, visual deception, storytelling, and the occult, Solomon treats cinema and stage magic as overlapping practices that together revise our understanding of the origins of motion pictures and cinematic spectacle.

"Along with intriguing insights into the early development of film, Disappearing Tricks is a reminder that magic and movies involve playing with perceptions and making the appearance of reality seem malleable."--ExpressMilwaukee.com

"Students of magic history, film history, the intersection of both, and of Houdini's film career in particular, will all find much to enlarge their insight and understanding of these subjects."--GENII

"Conjuring up an amazing trick of his own with this engaged scholarship, Solomon provides a fresh, fascinating display of theory applied to film history. This is one of the most succinct, scintillating books of the year. Essential."--Choice

"A sharp, sophisticated, and fascinating read."--Magicol

"A truly important and impressive book, the most thoroughly researched and broadly conceived history of the interaction between magicians and cinema that anyone has offered or is likely to offer."--Tom Gunning, author of The Films of Fritz Lang: Allegories of Vision and Modernity

Matthew Solomon is an associate professor in the Department of Screen Arts and Cultures at the University of Michigan.