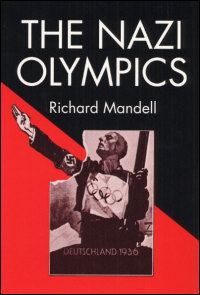 Spectacle and propaganda at the Berlin Games in 1936

The Nazi Olympics is the unsurpassed exposé of one of the most bizarre festivals in sport history. Not only does it provide incisive portraits of such key figures as Adolf Hitler, Jesse Owens, Leni Riefenstahl, Helen Stephens, Kee Chung Sohn, and Avery Brundage, it also vividly conveys the entire dazzling charade that reinforced and mobilized the hysterical patriotism of the German masses.

"A riveting book. It is, above all, a caution against nationalism in sport."--London Sunday Times

"Covers not merely the games themselves but the history of the modern games, Europe in the 1930s, the debates over United States participation, the role of the games in Nazi propaganda efforts, and even a critique of filmmaker Leni Riefenstahl's career. Mandell's comments on these issues are always interesting and worthwhile. . . . Few American historians could equal his considerable research in German documents."--Jules Tygiel, author of Baseball's Great Experiment: Jackie Robinson and His Legacy

Richard D. Mandell (d. 2013) was a professor of history at the University of South Carolina. He is the author of The First Modern Olympics and Sport: A Cultural History.