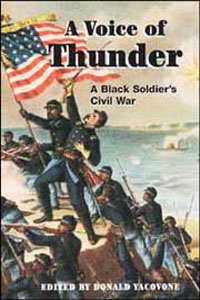 A Voice of Thunder

George E. Stephens, the most important African-American war correspondent of his era, served in the famed black Fifty-fourth Massachusetts Regiment, subject of the film Glory. His letters from the front, published in the New York Weekly Anglo-African, brilliantly detail two wars: one against the Confederacy and one against the brutal, debilitating racism within his own Union Army. Together with Donald Yacovone's biographical introduction detailing Stephens's life and times, they provide a singular perspective on the greatest crisis in the history of the United States.

Stephens chronicled the African-American quest for freedom in reports from southern Maryland and eastern Virginia in 1861 and 1862 that detailed, among other issues of the day, the Army of the Potomac's initial encounter with slavery, the heroism of fugitive slaves, and the brutality both Southerners and Union troops inflicted on them.

From the inception of the Fifty-fourth early in 1863 Stephens was the unit's voice, telling of its struggle against slavery and its quest to win the pay it had been promised. His description of the July 18, 1863, assault on Battery Wagner near Charleston, South Carolina, and his writings on the unit's eighteen-month campaign to be paid as much as white troops are gripping accounts of continued heroism in the face of persistent insult.

The Weekly Anglo-African was the preeminent African-American newspaper of its time. Stephens's correspondence, intimate and authoritative, takes in an expansive array of issues and anticipates nearly all modern assessments of the black role in the Civil War. His commentary on the Lincoln administration's wartime policy and his conviction that the issues of race and slavery were central to nineteenth-century American life mark him as a major American social critic. 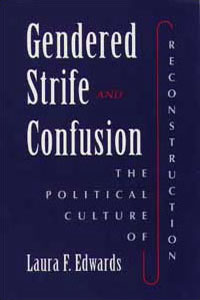 The Political Culture of Reconstruction