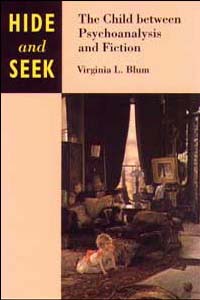 The Child between Psychoanalysis and Fiction

In response to widespread cultural fantasies about the child--including childhood innocence, the child as origin of the adult, the fetal emergence of subjectivity, and the "inner child" movement--Hide and Seek examines representations of the child in fiction, psychoanalysis, and popular culture.

Concentrating on the "go-between" function of the child in nineteenth- and twentieth-century American and British fiction, Virginia Blum shows how selected children in the works of L. P. Hartley, Charles Dickens, Henry James, and Vladimir Nabokov were actually fictional messengers who ultimately were unsuccessful at reconciling impasses in the adult world.

Throughout her book Blum draws on pop images of real and fictional children, ranging from the Baby Jessica case, in which the idea of "real" paternity and family bonds comes to the mythic fore, to the film Home Alone, in which the abandoned child becomes protector of his family's hearth and home. Hide and Seek raises provocative questions about the ways in which our culture fetishizes the idea of the child at the same time that we treat with comparative indifference the conditions under which many real children actually live.