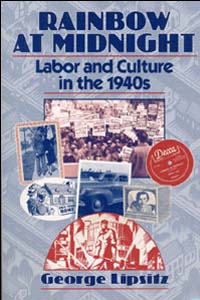 Labor and Culture in the 1940s

Rainbow at Midnight details the origins and evolution of working-class strategies for independence during and after World War II. Arguing that the 1940s may well have been the most revolutionary decade in U.S. history, George Lipsitz combines popular culture, politics, economics, and history to show how war mobilization transformed the working class and how that transformation brought issues of race, gender, and democracy to the forefront of American political culture. This book is a substantially revised and expanded work developed from the author's heralded 1981 Class and Culture in Cold War America.

"George Lipsitz's Rainbow at Midnight is a rich and fascinating study of lost possibilities, of the roads not taken at the dawn of the cold war."--Jon Wiener, author of Professors, Politics, and Pop

"Simply breathtaking! Passionately written, it integrates a decade of new scholarship and new ideas, radically refines and sharpens earlier interpretations, and weaves into the text an extraordinarily sophisticated discussion of gender, race, and popular culture. Lipsitz has demonstrated once again why he is among the world's finest historians of working-class culture."--Robin D. G. Kelley, author of Race Rebels: Culture, Politics, and the Black Working Class

George Lipsitz, a professor of ethnic studies at the University of California at San Diego, is also the author of A Life in the Struggle: Ivory Perry and the Culture of Opposition, for which he won the Kayden Prize and the Anisfield-Wolf Prize.