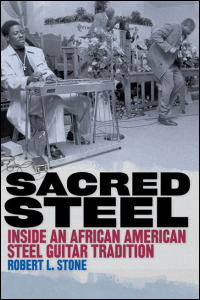 The first in-depth look at a unique sacred music tradition

In this book, Robert L. Stone follows the sound of steel guitar into the music-driven Pentecostal worship of two related churches: the House of God and the Church of the Living God. A rare outsider who has gained the trust of members and musicians inside the church, Stone uses nearly two decades of research, interviews, and fieldwork to tell the story of a vibrant musical tradition that straddles sacred and secular contexts.

Most often identified with country and western bands, steel guitar is almost unheard of in African American churches--except for the House of God and the Church of the Living God, where it has been part of worship since the 1930s. Sacred Steel traces the tradition through four generations of musicians and in some two hundred churches extending across the country from Florida to California, Michigan to Alabama. Presenting detailed portraits of musical pioneers such as brothers Troman and Willie Eason and contemporary masters such as Chuck Campbell, Glenn Lee, and Robert Randolph, Stone expertly outlines the fundamental tensions between sacred steel musicians and church hierarchy.

In this thorough analysis of the tradition, Stone explores the function of the music in church meetings and its effect on the congregations. He also examines recent developments such as the growing number of female performers, the commercial appeal of the music, and younger musicians' controversial move of the music from the church to secular contexts.

"[Stone] paints compelling portraits of many of the genre's major figures."--Living Blues

"Stone’s book is a bit like that revelatory moment when you hear a new kind of sound and it seems to ignite the air around you. He has done something special, not only for the artists whose lives and history he has chronicled, but for those of us previously unaware of this important tradition of African American music."--Popmatters

"Sacred Steel music has only crossed over to a wider audience in the last 10 years ... and the story of the feel-good music is covered in depth in the new entertaining book Sacred Steel."--In The Groove, Steve Ramm

"Easy-to-read yet scholarly examination of this arrestingly unique sacred music tradition."--Sing Out!

"Breaks much new ground and underscores the critical role that fieldwork plays in documenting our vernacular music traditions in the twenty-first century."--Journal of American Folklore

"This book honors the legacy of the men who paved my musical path. All of us in the Sacred Steel brotherhood owe Bob a debt of gratitude for documenting our musical tradition."--Robert Randolph

"Robert L. Stone knows sacred steel music in a most profound way. He has amassed an incredible archive of photos, interviews, and recordings related to this remarkable musical culture. This book will appeal to those interested in not just sacred steel but the history of the steel guitar, gospel, blues, and American roots music in general."--Craig Morrison, ethnomusicologist and author of Go Cat Go! Rockabilly Music and Its Makers

"A pioneering work on the emergence, development, and current status of a vital but long overlooked tradition. Students of African American music, folklore, and ethnomusicology will find Sacred Steel both enlightening and engaging."--Scott Barretta, music historian and former editor of Living Blues magazine

Robert L. Stone is an independent folklorist, musician, and media producer living in Florida. He has produced eight sacred steel albums for Arhoolie Records and directed the documentary video Sacred Steel for the Arhoolie Foundation.