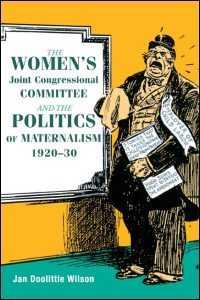 The Women's Joint Congressional Committee and the Politics of Maternalism, 1920-30

The rise and fall of a feminist reform powerhouse

Jan Doolittle Wilson offers the first comprehensive history of the umbrella organization founded by former suffrage leaders in order to coordinate activities around women's reform. Encompassing nearly every major national women's organization of its time, the Women's Joint Congressional Committee (WJCC) evolved into a powerful lobbying force for the legislative agendas of more than twelve million women. Critics and supporters alike came to recognize it as "the most powerful lobby in Washington."

Examining the WJCC's most consequential and contentious campaigns, Wilson traces how the group's strategies, rhetoric, and success generated congressional and grassroots support for their far-reaching, progressive reforms. But the committee's early achievements sparked a reaction by big business that challenged and ultimately limited the programs these women envisioned. Using the WJCC as a lens, Wilson analyzes women's political culture during the 1920s. She also sheds new light on the initially successful ways women lobbied for social legislation, the limitations of that process for pursuing class-based reforms, and the enormous difficulties the women soon faced in trying to expand public responsibility for social welfare.

"A important addition to our understanding of how 'alliances and divisions among women coexisted and were continually renegotiated, contested, and reconstructed through changing historical and social circumstances'. We see the strength of political connections through the WJCC and the failings of that strength when society turned against any group with a hint of Communist or social leaning,"--Journal of American History

“The arguments are clearly articulated and all of the evidence is properly marshaled. . . . Scholars interested in early twentieth-century women’s political history will find a wealth of information.”--Historian

"Significantly contributes to the growing literature on powerful undercurrents of women's activism between the two "waves" of feminism, the fight for suffrage and the modern women's liberation movement."--Feminist Teacher

"Focusing on the robust social justice agenda of the suffrage movement that lived on in the Women's Joint Congressional Committee in the 1920s, Wilson's pathbreaking book shows us how aggressive attacks from opponents like the National Association of Manufacturers scuttled that agenda and shifted American political culture substantially to the right. A compelling and important story."--Kathryn Kish Sklar, author of Florence Kelley and the Nation's Work: The Rise of Women's Political Culture, 1830-1900

"As the first systematic examination of the Women's Joint Congressional Committee, this book provides a meticulous description of how the committee worked--the conversation and debates within the organization, the ways the larger political context affected the WJCC's agenda, and how subcommittees focused on particular issues and pieces of legislation. It provides a vivid sense of the connections between the WJCC and its allies in Congress and convincingly shows that the WJCC's agenda was highly consistent with and supportive of the agendas of progressive members of Congress."--Kristi Andersen, author of After Suffrage: Women in Partisan and Electoral Politics before the New Deal

Jan Doolittle Wilson is Wellspring Associate Professor of Women's and Gender Studies and History at the University of Tulsa.