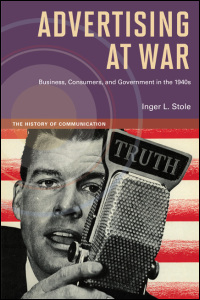 Business, Consumers, and Government in the 1940s

The advertising industry's rise to power, in war and peace

Advertising at War challenges the notion that advertising disappeared as a political issue in the United States in 1938 with the passage of the Wheeler-Lea Amendment to the Federal Trade Commission Act, the result of more than a decade of campaigning to regulate the advertising industry. Inger L. Stole suggests that the war experience, even more than the legislative battles of the 1930s, defined the role of advertising in U.S. postwar political economy and the nation's cultural firmament. She argues that Washington and Madison Avenue were soon working in tandem with the creation of the Advertising Council in 1942, a joint effort established by the Office of War Information, the Association of National Advertisers, and the American Association of Advertising Agencies.

Using archival sources, newspapers accounts, and trade publications, Stole demonstrates that the war elevated and magnified the seeming contradictions of advertising and allowed critics of these practices one final opportunity to corral and regulate the institution of advertising. Exploring how New Dealers and consumer advocates such as the Consumers Union battled the advertising industry, Advertising at War traces the debate over two basic policy questions: whether advertising should continue to be a tax-deductible business expense during the war, and whether the government should require effective standards and labeling for consumer products, which would render most advertising irrelevant. Ultimately the postwar climate of political intolerance and reverence for free enterprise quashed critical investigations into the advertising industry. While advertising could be criticized or lampooned, the institution itself became inviolable.

"Can spark an interesting debate about advertising's role in society and its relationship to consumer demand and desire. . . . well written, highly readable."--Journalism & Mass Communication Quarterly

"Inger L. Stole provides a well-researched study of the advertising industry's political maneuvers during World War II and their implications for the postwar era. Stole's study is the most detailed account to date of the wartime advertising industry as a whole."--The Journal of American History

"Stole weaves a thought-provoking tale of corporate power and government collusion drawn from the archives of the Ad Council, the Consumer's Union, the Federal Trade Commission, the Offices of War Programs and Information, and numerous federal officials and corporate big-wigs. The result is a lucid, top-down discussion."--Journal of American Culture

"An excellent case study of a business during the war. . . . Stole shows us that the advertising industry was carefully and craftily navigating the potentially hazardous waters of the war economy, and thus laying the groundwork for its postwar efflorescence."Journal of American Studies

"Well conceived and judiciously argued, Advertising at War shows how the World War II years were critical to solidifying advertising's place as one of the basic institutions of American society and economy. Stole provides insight into the advertising industry's campaign to defend itself and free enterprise as well as the wartime consumer movement."-- Elizabeth Fones-Wolf, author of Waves of Opposition: Labor and the Struggle for Democratic Radio

Inger L. Stole is an associate professor of communications at the University of Illinois at Urbana-Champaign and the author of Advertising on Trial: Consumer Activism and Corporate Public Relations in the 1930s.

Consumer Activism and Corporate Public Relations in the 1930s