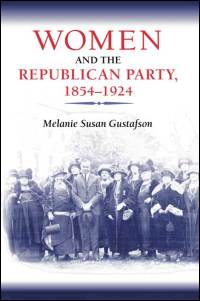 Women's involvement in party politics before obtaining the vote

Acclaimed as groundbreaking since its publication, Women and the Republican Party, 1854-1924 explores the forces that propelled women to partisan activism in an era of widespread disfranchisement and provides a new perspective on how women fashioned their political strategies and identities before and after 1920.

Melanie Susan Gustafson examines women's partisan history against the backdrop of women's political culture. Contesting the accepted notion that women were uninvolved in political parties before gaining the vote, Gustafson reveals the length and depth of women's partisan activism between the founding of the Republican Party, whose abolitionist agenda captured the loyalty of many women, and the passage of the Nineteenth Amendment. Her account also looks at the complex interplay of partisan and nonpartisan activity; the fierce debates among women about how to best use their influence; the ebb and flow of enthusiasm for women's participation; and the third parties that fused the civic world of reform organizations with the electoral world of voting and legislation.

"Traces the political participation of women in the Republican Party from its inception in 1854 through the first elections after the passage of the Nineteenth Amendment. . . . Not only do readers learn about women formerly invisible, but Gustsafson shows more-famous women in a new light—women such as Elizabeth Cady Stanton, Susan B. Anthony, Mary Church Terrell, or Jane Addams."--History

"Gustafson convincingly demonstrates that women's partisan activism has a long history antedating the achievement of suffrage."--Journal of Illinois History

"Forces us to think both broadly and concretely about how women develop political identities and strategies. Researchers will turn to her book for years to come."--American Historical Review

"This is an invaluable study of nonvoting women's partisan activities, which should eliminate the notion that no women entered electoral politics before 1920. It is wide-ranging and unprecedentedly thorough and includes points of conflict between women's efforts on behalf of the Republican party and their identification with nonpartisan causes (such as the suffrage movement itself). Gustafson's treatment of the Bull Moose Progressives is especially fascinating."--Nancy Cott, author of Public Vows: A History of Marriage and the Nation

"This skillfully written and insightful narrative traces the roots of women's participation in the Republican party to such radical and progressive reformers as Elizabeth Cady Stanton, Susan B. Anthony, Anna Dickinson, Mary Church Terrell, Jane Addams, and Mary Ann Shadd Cary. This is a must-read for historians and others interested in women's influence on party politics before and immediately following suffrage."--Harriet Hyman Alonso, author of Peace as a Women's Issue: A History of the U.S. Movement for World Peace and Women's Rights

"Melanie Gustafson's Women and the Republican Party, 1854-1924 is a book of great significance. Gustafson makes it clear that for many years before the ratification of the Nineteenth Amendment, women were actively seeking a stronger role in political parties while seeking the parties' support for expansion of women's political power. Grounded in extensive research and written in an accessible style, the book will appeal not only to students of women's political culture in the nineteenth and early twentieth centuries but to anyone interested in the gender politics of today."--Marjorie Julian Spruill, author of One Woman, One Vote: Rediscovering the Woman Suffrage Movement

Melanie Susan Gustafson is a professor and Director of Undergraduate Studies, Coordinator of Transfer Affairs, Study Abroad, at the University of Vermont. She is the coauthor of We Have Come to Stay: American Women and Political Parties, 1880-1960.