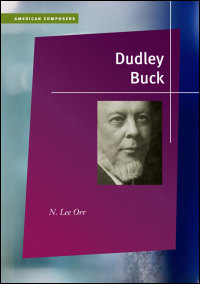 A popular Victorian composer of organ and choral music

An influential composer, conductor, and music teacher, Dudley Buck (1839-1909) helped establish the organ in American musical life. N. Lee Orr's study of Buck's life and career details his stint as teacher to Charles Ives, organ recital tours around the Midwest, and work composing music for church organs. Buck's Grand Sonata in E Flat became a great hit wherever he played it, and his Variations and Fugue on the "Star-Spangled Banner" remains a standard in organ repertoire. Intended for practical use, his music was challenging, sometimes full of romantic flourishes, counterpoint, and part singing, but still accessible to amateur musicians and choirs.

During the 1870s, Buck composed extensively for choir, orchestra, and organ, while also helping organize and conduct the first Central Park Garden Concerts. His reputation was such that he was asked to collaborate with the poet Sidney Lanier to commemorate the nation's centennial, and his Forty-Sixth Psalm was the first American composition performed by Boston's Handel and Haydn Society. Placing Buck's life and career within the Victorian mindset that sought to draw citizens into higher circles of art and beauty, Orr stresses how Buck's music touched players and listeners of all classes.

"Buck sculpted a portrait of his time that . . . is eloquently presented in this accessible, well-written volume. . . . Recommended."--Choice

"An enjoyable and insightful book that will prove invaluable to anyone interested in organ music, choral music, and the history of composition and performance in nineteenth-century America."--R. Allen Lott, author of From Paris to Peoria: How European Piano Virtuosos Brought Classical Music to the American Heartland

N. Lee Orr is a professor and chair of music history and literature at Georgia State University. An organist and conductor, he is also the author or editor of many books, including Dudley Buck: American Victorian Choral Music.