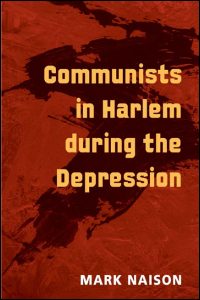 Communists in Harlem during the Depression

The origins and impact of America's black Left

No socialist organization has ever had a more profound effect on black life than the Communist Party did in Harlem during the Depression. Mark Naison describes how the party won the early endorsement of such people as Adam Clayton Powell Jr. and how its support of racial equality and integration impressed black intellectuals, including Richard Wright, Langston Hughes, and Paul Robeson.

This meticulously researched work, largely based on primary materials and interviews with leading black Communists from the 1930s, is the first to fully explore this provocative encounter between whites and blacks. It provides a detailed look at an exciting period of reform, as well as an intimate portrait of Harlem in the 1920s and 30s, at the high point of its influence and pride.

"A scholarly work distinguished by compassion for all who joined the black struggle, regardless of ideological stripe."--New York Times Book Review

“Mark Naison's book is a milestone in studies both of the Communist Party USA and of that metropolis of black culture, Harlem. . . . He has produced a subtle, original, and extremely valuable account of this most important subject."--Journal of Southern History

"Mark Naison's Communists in Harlem during the Depression is one of the most important studies of the black Left ever written in the U.S., full of hitherto-unknown material, loaded with insight, a classic and even fun to read!"--Paul Buhle, coeditor of the Encyclopedia of the American Left

Mark Naison is professor of African American studies and history at Fordham University. He is the author of White Boy: A Memoir and co-author of The Tenant Movement in New York City, 1940-1984.