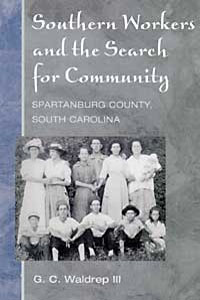 Southern Workers and the Search for Community

Spartanburg County, South Carolina, offered an example of enduring legacy of the southern textile industry, company-owned mill villages, and union struggles of the 1930s. G. C. Waldrep illuminates the complex meshing of community ties and traditions with the goals and ideals of unionism. Unions aligned with a social vision of mutuality, equality, and interdependency already established in mill villages. But because companies owned the village, labor conflicts involved not only work issues like wages and hours but virtually every other aspect of life. In documenting the high stakes of labor protest, Waldrep shows how the erosion or outright destruction of community undermined the ability of workers to respond to the assaults of employers overwhelmingly supported by government agencies and agents.

Beautifully written and persuasively argued, Southern Workers and the Search for Community opens the gates of southern company towns to illuminate the human issues behind the mechanics of labor.

"A welcome contribution to the literature on southern working-class culture. Concentrating on the informal structures of textile workers' lives in Spartanburg County, South Carolina, in the 1930s, G. C. Waldrep III seeks a language for the 'private transcript' of their history. He employs such official documentation as newspapers, government records, and union archives but relies most heavily on workers' oral histories."--John Hennen, American Historical Review

"One of the book's strengths is its use of oral history. . . . Another is [Waldrep's] use of the workers' letters to President Franklin D. Roosevelt. In this, he brings the anguish of a number of heretofore invisible individuals to light."--R. Phillip Stone, Journal of Southern History

G. C. Waldrep III is a professor of English at Bucknell University and an award-winning poet.