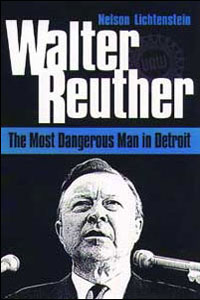 The Most Dangerous Man in Detroit

1996 Notable Book of the Year from the *New York Times*. Recipient of the Phi Beta Kappa Award; Distinguished Honorable Mention from the Sydney Hillman Foundation.

Supported by The Walter and May Reuther Memorial Fund

Previously published by Basic Books as The Most Dangerous Man in Detroit: Walter Reuther and the Fate of American Labor

"Management has no divine rights."--Walter Reuther

"A splendid biography of America's most creative and commanding labor leader with an illuminating diagnosis of the vicissitudes and frustrations of the American trade union movement."--Arthur Schlesinger, Jr.

"Sympathetic, yet bluntly critical at key points. . . . Goes beyond biography to offer keen insights into the evolution and more recent decline of both American labor and liberalism."--David Moberg, Los Angeles Times Book Review

"There could be no better context for evaluating where the labor movement has been and the challenges it faces ahead. . . . A meticulously researched, clearly written and quickly paced story."--Jeffrey E. Garten, Washington Post Book World

"An ideal union of scholarship and literature . . . properly places labor leader Walter Reuther in the center of the most important social and political movements of the twentieth century. This is an important book."--Julian Bond

Nelson Lichtenstein, a professor of history at the University of Virginia, is coeditor of On the Line: Essays in the History of Auto Work and author of Labor's War at Home: The CIO in World War II.