The contributors demonstrate that the anticommunist movement was more diverse, more pervasive, and more sharply and creatively contested than historians have realized. Yet workers and their allies defended ongoing progressive politics at the local level. Examples include fights for fair employment and public housing; the expansion of New Deal-style regional development; the abolition of racial and ethnic discrimination policies; and workplace policies from the right to organize to a voice in wage and price controls. Local political stories from New Mexico, California, occupied Japan, Milwaukee, Detroit, St. Louis, and Schenectedy provide important alternative perspectives on the transformative power of anticommunism in the postwar period and contribute to an ongoing revision of the history of Cold War America and its political legacies.

"Labor's Cold War provides a valuable and timely historical reinterpretation that goes to the roots of the Cold War as it affected the American labour movement and its allies."--Labour/Le Travail

"The emphasis on the interconnections between local and national themes makes this book a genuinely unique and compelling addition to labor literature. As such, it removes issues related to labor and the left from the internecine workplace and union struggles and moves them to the more interesting arena of local social and economic policies."--Stephen Meyer, author of Stalin over Wisconsin: The Making and Unmaking of Militant Unionism, 1900-1950

Shelton Stromquist is a professor emeritus of history at the University of Iowa. He is the author of Reinventing "The People": The Progressive Movement, the Class Problem, and the Origins of Modern Liberalism and coeditor of Frontiers of Labor: Comparative Histories of the United States and Australia. 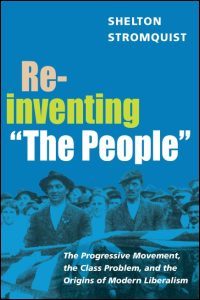 The Progressive Movement, the Class Problem, and the Origins of Modern Liberalism