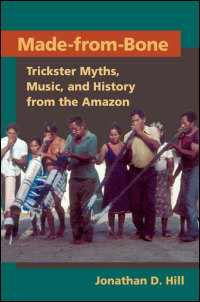 Trickster Myths, Music, and History from the Amazon

Translated narratives from the indigenous Wakuénai of South America

Among the Arawak-speaking Wakuénai of southern Venezuela, storytellers call narratives about the mythic past "words from the primordial times." These stories are set in an unfinished space-time before there were any clear distinctions between humans and animals, men and women, day and night, old and young, and powerful and powerless. The central character throughout the primordial times and during the ensuing developments that open up the world of distinct peoples, species, and places is a trickster-creator named Made-from-Bone, who survives a prolonged series of life-threatening attacks and ultimately defeats all his adversaries.

Made-from-Bone provides a complete set of English translations of these narratives about the mythic past. Recorded and transcribed by Jonathan D. Hill, the narratives offer scholars the only ethnographically generated cosmogony of contemporary or ancient native peoples of South America. Hill includes interpretive and ethnographic discussions that expand on the Made-from-Bone myths.

“Interlacing worldview and myth with song and story, [Hill] conveys on various levels his detailed knowledge of Wakuénai ways. . . . Enticing and evocative.”--Journal of Folklore Research

"A great achievement. The clear text allows readers to comprehend the complexity of the Made-from-Bone trickster, a figure that represents the principles of the Wakuénai culture itself. Hill shows that myth is not mere 'folklore' or 'text' but something deeper, a field of unseen forces and powers by which people experience the world through dynamic, shifting forms."--Michael Uzendoski, author of The Napo Runa of Amazonian Ecuador

"An absorbing journey through the mythic history and musicscapes of the Wakuénai people. Jonathan D. Hill masterfully captures the sensuous and poetic dimensions of Wakuénai narratives while highlighting their enduring engagement with the events, struggles, and uncertainties of modern life. This is a painstakingly assembled Amerindian bible complete with its own hardcore exegesis."--Fernando Santos-Granero, Smithsonian Tropical Research Institute

Jonathan D. Hill is professor emeritus in the Department of Anthropology at Southern Illinois University. He is the author of Comparative Arawakan Histories: Rethinking Language Family and Culture Area in Amazonia and Keepers of the Sacred Chants: The Poetics of Ritual Power in an Amazonian Society. 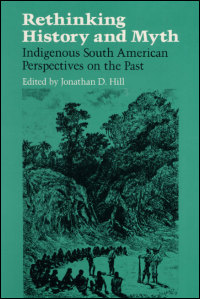 Indigenous South American Perspectives on the Past