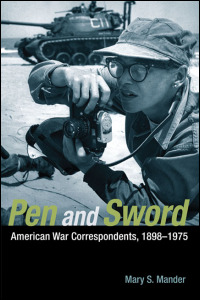 Linking war correspondence to the history of modern warfare

Addressing the ever-changing, overlapping trajectories of war and journalism, this introduction to the history and culture of modern American war correspondence considers a wealth of original archival material. In powerful analyses of letters, diaries, journals, television news archives, and secondary literature related to the United States' major military conflicts of the twentieth century, Mary S. Mander highlights the intricate relationship of the postmodern nation-state to the free press and to the public.

Pen and Sword: American War Correspondents, 1898-1975 situates war correspondence within the larger framework of the history of the printing press to make perceptive new points about the nature of journalism and censorship, the institution of the press as a source of organized dissent, and the relationship between the press and the military. Fostering a deeper understanding of the occupational culture of war correspondents who have accompanied soldiers into battle, Mander offers interpretive analysis of the reporters' search for meaning while embedded with troops in war-torn territories. Broadly encompassing the history of Western civilization and modern warfare, Pen and Sword prompts new ways of thinking about contemporary military conflicts and the future of journalism.

"A thoughtful consideration of the history and culture of war correspondence in the United States. Written in an engaging, muscular voice and filled with flashes of insight, Pen and Sword makes novel arguments based on significant archival research."--John C. Nerone, coauthor of The Form of News: A History

"A stimulating inquiry into the place of war correspondents in twentieth-century American life. Part history and part theory, Mary S. Mander's work is provocative. Her effort to recover the voices of journalists and the dance between them and the military and government is extremely important."--Owen V. Johnson, coauthor of Eastern European Journalism: Past, Present, and Future

Mary S. Mander is a professor emeritus of communications at The Pennsylvania State University and the editor of Framing Friction: Media and Social Conflict.