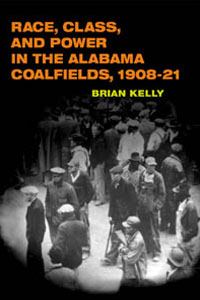 Brian Kelly's acclaimed look at the fault lines in the society of an Alabama city challenges the notion that white workers led the resistance to racial equality in the Jim Crow South. Kelly focuses on the forces that brought the black and white miners of Birmingham, Alabama, together during the hard-fought strikes of 1908 and 1920. He examines the systematic efforts by the region's powerful industrialists to create racial divisions as a means of splitting the workforce, preventing unionization, and keeping wages the lowest in the United States. He also details the role played by Birmingham's small but influential black middle class, whose espousal of industrial accommodation outraged black miners and revealed significant tensions within the African American community.

"This is a good book that is at its best in exploring coal operator paternalism and black accommodationism."--The Journal of American History

"Through the poignant tale of miners' failed efforts to build a durable union during this period, the book also offers a compelling intervention into recent historical debates concerning race, class, and the nature of biracial unionism during the Jim Crow era."--Choice

"Brian Kelly has cut through the tangle of controversy involving Alabama's black and white coal miners. By returning the agency of employers to the analysis of race relations, Kelly has produced a sophisticated and compelling account of race, class, and power that students of all periods of U.S. history need to read."--Judith Stein, author of Running Steel, Running America: Race, Economic Policy, and the Decline of Liberalism

"This excellent book convincingly connects labor disputes in the Alabama coalfields of the early twentieth century with the legacy of plantation slavery in the Old South."--W. David Lewis, author of Sloss Furnaces and the Rise of the Birmington District: An Industrial Epic

Brian Kelly is a lecturer in the School of History, Anthropology, Philosophy and Politic at Queen's University Belfast and director of the After Slavery Project.