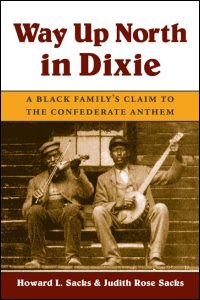 Way Up North in Dixie

A Black Family's Claim to the Confederate Anthem

Did an African American family of musicians write "Dixie"?

This book traces the lives of the Snowdens, an African American family of musicians and farmers living in rural Knox County, Ohio. Howard L. Sacks and Judith Rose Sacks examine the Snowdens' musical and social exchanges with rural whites from the 1850s through the early 1920s and provide a detailed exploration of the claim that the Snowden family taught the song "Dixie" to Dan Emmett--the white musician and blackface minstrel credited with writing the song. This edition features a new introduction in which the authors discuss the public response to their controversial claim and present additional information on the Snowdens' musical and social experiences.

"An intriguing and textured portrait of a black family in the nineteenth-century North. . . . Arguing that those who have searched for black influences on minstrelsy have exclusively and mistakenly focused on the South, the authors seek to demonstrate the closely intertwined traditions of black and white music above the Mason-Dixon line. . . . Not only has blackface minstrelsy exerted ‘a pervasive impact on American music' . . . it has also served as both symbol and metaphoric expression of the complexities of American racial identity."--Drew Gilpin Faust, New York Times

"A haunting and heroic story, which the Sackses tell eloquently. . . . The fullest, most finely detailed account I know of the musical life of a nineteenth-century African American family anywhere in the United States."--Ken Emerson, The Nation

"The process of cultural exchange the Sackses have delineated is one of which all historians of race in America need to be aware."--Dickson D. Bruce, Jr., American Historical Review