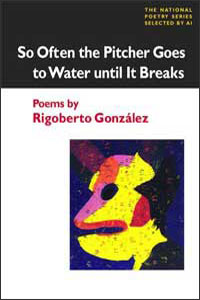 So Often the Pitcher Goes to Water Until It Breaks

An astonishing new talent, Rigoberto González writes with a clarity of the senses that pulls the reader into a marvelous and unfamiliar world. The sidewalk preacher, the umbrella salesman, the nurse on the graveyard shift, the professional mourner— all allow González a clandestine glimpse of their lives. Crackling with the dry electricity of the desert and flashing with the brilliant colors of Mexico, González's poems are rooted in the fertile soil beneath poverty's dust, the border's violence, and longing's desolation.

"So Often the Pitcher Goes to Water until It Breaks by Rigoberto Gonzalez is a poetic ‘remembrance of things past,' a rare combination of beauty and craft, employed in the service of memory."--Ai

"This book is a magnificent debut. Rigoberto Gonzalez's poems shock me--they regale with the charming particulars of death and constant loss, of a world of love, bonds, between people, but no safety. Gonzalez has a sensitivity to tragedy that sounds as ancient as it does personal and immediate. His knowledge of the spirituality of working, of almost mystically odd professions, gives us stories and characters we've never encountered before. A brilliant poet of two nations, he is a treasure found."--Sandra McPherson

Rigoberto Gonzalez was born in Bakersfield, California, and raised in Michoacan, Mexico, the son and grandson of migrant farm workers. Educated at the University of California at Riverside and at Davis and at Arizona State University, he was awarded a University Award from the Academy of American Poets.