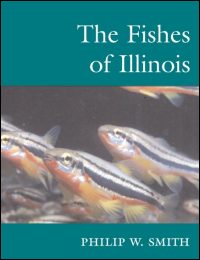 The Fishes of Illinois

Illinois bodies of water are home to a diverse population of fishes, from the silverjaw minnows that inhabit the shallow, sandy bottoms of eastern Illinois streams to the freckled madtom catfish that are particular to the Kaskaskia River or the banded pygmy sunfish that prefer swampy sloughs in the state's southernmost region. This comprehensive volume, now available for the first time in paperback, is considered the definitive reference work on the state's 199 species of fishes.

Supplementing the information compiled in Stephen A. Forbes and Robert E. Richardson's 1908 treatise on Illinois fishes, Philip W. Smith's The Fishes of Illinois includes variation analyses, distribution and ecological data summaries, and a glossary of scientific terms. Smith also notes which species have been wiped out, which have been reduced or threatened as a result of water quality issues and habitat changes, and which of the non-native species introduced in Illinois have thrived.

The Fishes of Illinois devotes a full chapter to each of the state's twenty-eight families of fishes, identifying each family's common and scientific name and detailing its evolutionary relationships and economic importance. Within the family classifications, genera are defined by common physical traits and geographical distribution. Next, each species of fish–-also identified by common and scientific names–-is discussed in terms of its physiology, variations and subspecies, ecological standing, and abundance. Each species listing is supplemented by a map that indicates the distribution of the species before 1908 by one symbol and modern-day distribution by another.

Enhanced by 185 illustrations (34 of them in color) and keys for identification, The Fishes of Illinois is an invaluable companion for students, teachers, ichthyologists, and those who enjoy fishing and nature.

"The definitive reference for anyone, whether a fisherman or ichthyologist, who is interested in the past and present status of fishes and aquatic habitats in the Midwest." –- Illinois Wildlife

"A worthy descendent of Forbes and Richardson's classic Fishes of Illinois. . . . this updated version is a welcome addition to an icthyologist's shelf." –- Copeia

"Barring ecological disaster, the fishes of Illinois should need no further recountal for eons." –- American Scientist