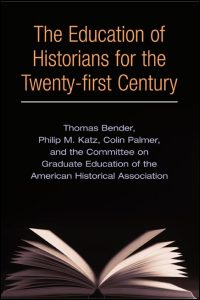 In 1958, the American Historical Association began a study to determine the status and condition of history education in U.S. colleges and universities. Published in 1962 and addressing such issues as the supply and demand for teachers, student recruitment, and training for advanced degrees, that report set a lasting benchmark against which to judge the study of history thereafter. Now, more than forty years later, the AHA has commissioned a new report. The Education of Historians for the Twenty-first Century documents this important new study's remarkable conclusions.

Both the American academy and the study of history have been dramatically transformed since the original study, but doctoral programs in history have barely changed. This report from the AHA explains why and offers concrete, practical recommendations for improving the state of graduate education. The Education of Historians for the Twenty-first Century stands as the first investigation of graduate training for historians in more than four decades and the best available study of doctoral education in any major academic discipline.

Prepared for the AHA by the Committee on Graduate Education, the report represents the combined efforts of a cross-section of the entire historical profession. It draws upon a detailed review of the existing studies and data on graduate education and builds upon this foundation with an exhaustive survey of history doctoral programs. This included actual visits to history departments across the country and consultations with scores of individual historians, graduate students, deans, academic and non-academic employers of historians, as well as other stakeholders in graduate education.

As the ethnic and gender composition of both graduate students and faculty has changed, methodologies have been refined and the domains of historical inquiry expanded. By addressing these revolutionary intellectual and demographic changes in the historical profession, The Education of Historians for the Twenty-first Century breaks important new ground. Combining a detailed historical snapshot of the profession with a rigorous analysis of these intellectual changes, this volume is ideally positioned as the definitive guide to strategic planning for history departments. It includes practical recommendations for handling institutional challenges as well as advice for everyone involved in the advanced training of historians, from department chairs to their students, and from university administrators to the AHA itself.

Although focused on history, there are lessons here for any department. The Education of Historians for the Twenty-first Century is a model for in-depth analysis of doctoral education, with recommendations and analyses that have implications for the entire academy. This volume is required reading for historians, graduate students, university administrators, or anyone interested in the future of higher education.

Thomas Bender is University Professor of the Humanities and a professor of history at New York University. He is the co-editor of American Academic Culture in Transformation, and author of Toward an Urban Vision, Intellect and Public Life, and many other books. Philip M. Katz is the research director for graduate education at the American Historical Association. He is the author of From Appomattox to Montmartre: Americans and the Paris Commune. Colin Palmer is Dodge Professor of History at Princeton University and chair of the AHA Committee on Graduate Education. He is the author of Slaves of the White God: Blacks in Mexico, 1570-1650 and Human Cargoes: The British Slave Trade to Spanish America, 1700-1739.