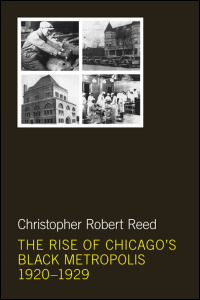 Assessing the roles of religion, politics, and class in the golden decade of black business

During the Roaring '20s, African Americans rapidly transformed their Chicago into a "black metropolis." In this book, Christopher Robert Reed describes the rise of African Americans in Chicago's political economy, bringing to life the fleeting vibrancy of this dynamic period of racial consciousness and solidarity.

Reed shows how African Americans rapidly transformed Chicago and achieved political and economic recognition by building on the massive population growth after the Great Migration from the South, the entry of a significant working class into the city's industrial work force, and the proliferation of black churches. Mapping out the labor issues and the struggle for control of black politics and black business, Reed offers an unromanticized view of the entrepreneurial efforts of black migrants, reassessing previous accounts such as St. Clair Drake and Horace R. Cayton's 1945 study Black Metropolis.

Utilizing a wide range of historical data, The Rise of Chicago's Black Metropolis, 1920–1929 delineates a web of dynamic social forces to shed light on black businesses and the establishment of a black professional class. The exquisitely researched volume draws on fictional and nonfictional accounts of the era, black community guides, mainstream and community newspapers, contemporary scholars and activists, and personal interviews.

"Presents a full and integrated picture of a dynamic and young community."--Journal of Illinois History

"Should be rightfully added to the new historiography of black Chicago."--The Journal of American History

"A readable and important work in African American and U.S. urban history."--Indiana Magazine of History

"An important contribution to the field of African American urban history and the history of black Chicago in particular. Among other things, Christopher Robert Reed persuasively cites the need for a reappraisal of Cayton and Drake's classic depiction of Chicago's 'Black Metropolis' by illuminating the role of professionals and political and religious organizations."--Robert E. Weems Jr., author of Black Business in the Black Metropolis: The Chicago Metropolitan Assurance Company, 1925–1985

"The Rise of Chicago's Black Metropolis, 1920–1929 is well organized, cogently written, and substantially documented. This thoroughly enjoyable work will be of interest not just to Chicagoans, but to scholars of urban studies, black entrepreneurship, and black politics."--Robert L. Harris Jr., coeditor of The Columbia Guide to African-American History Since 1939

Christopher R. Reed is a professor emeritus of history at Roosevelt University and the author of "All the World is Here": The Black Presence at White City and The Chicago NAACP and the Rise of Black Professional Leadership, 1910–1966.