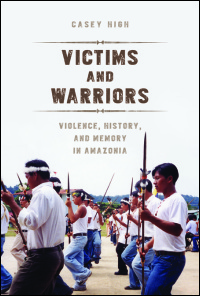 Violence, History, and Memory in Amazonia

Ancient ways and modern life among the Waorani of Ecuador

In 1956, a group of Waorani men killed five North American missionaries in Ecuador. The event cemented the Waorani's reputation as "wild Amazonian Indians" in the eyes of the outside world. It also added to the myth of the violent Amazon created by colonial writers and still found in academia and the state development agendas across the region.

Victims and Warriors examines contemporary violence in the context of political and economic processes that transcend local events. Casey High explores how popular imagery of Amazonian violence has become part of Waorani social memory in oral histories, folklore performances, and indigenous political activism. As Amazonian forms of social memory merge with constructions of masculinity and other intercultural processes, the Waorani absorb missionaries, oil development, and logging depredations into their legacy of revenge killings and narratives of victimhood. High shows that these memories of past violence form sites of negotiation and cultural innovation, and thus violence comes to constitute a central part of Amazonian sociality, identity, and memory.

"An exciting analysis of the most intimate aspects of memory and experience in a contemporary Amazonian indigenous group in dialogue with its own stereotypes. . . . A compelling book not only for anthropologists but for anyone interested in contemporary Amerindian groups."--European Review of Latin American and Caribbean Studies

"What do Bruce Lee, American missionaries being speared to death, Amerindians dancing in a national pride day, urban warrior performances, and a deeply felt sense of victimhood possibly have in common? In a refined narrative, Casey High weaves together memories, facts and fantasies as these occur in contemporary Ecuadorian Amazonia, offering us a fascinating picture of Waorani life today. This highly original book takes us a step further in the understanding of current sociocultural transformations among Amazonian indigenous peoples."--Carlos Fausto, National Museum, Federal University of Rio de Janeiro

"Insightful and terrifically readable. Victims and Warriors is a timely, innovative look at how Waorani use images of their violent past to craft new forms of masculinity and identity that remain remarkably resistant to gender hierarchy and sexual antagonism."--Beth Conklin, author of Consuming Grief: Compassionate Cannibalism in an Amazonian Society

"Usually Waorani voices are distorted due to some other outside agenda, but here we have a nuanced account that communicates their experiences, remembrances, and perspective. Being able to hear what Waorani people think and say about violent encounters and violence in general, as well as Christianity, development, and other topics related to Waorani life and history, makes for a compelling read."--Michael A. Uzendoski, author of The Ecology of the Spoken Word: Amazonian Storytelling and Shamanism among the Napo Runa

Casey High is a lecturer in social anthropology at the University of Edinburgh. He is coeditor of The Anthropology of Ignorance: An Ethnographic Approach.