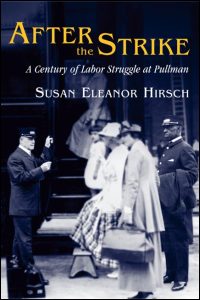 A Century of Labor Struggle at Pullman

Pullman Company employees and their long battle for economic justice

The 1894 Pullman strike and the rise of the Brotherhood of Sleeping Car Porters played major roles in the century-long development of union organizing and labor-management relations in the Pullman Company. Susan Eleanor Hirsch connects the stories of Pullman car builders and porters to answer critical questions like: what created job segregation by race and gender? What role did such segregation play in shaping the labor movement?

Hirsch illuminates the relationship between labor organizing and the racial and sexual discrimination practiced by both employers and unions. Because the Pullman Company ran the sleeping-car service for American railroads and was a major manufacturer of railcars, its workers were involved in virtually every wave of union organizing from the 1890s to the 1940s.

In exploring the years of struggle by the men and women of the Pullman Company, After the Strike reveals the factors that determined the limited success and narrow vision of most American unions.

"This densely argued and richly documented study demands much of the reader, but it also yields substantial rewards that prod us to rethink what once seemed a familiar story."--American Historical Review

"Hirsch's close analysis of payroll and employee service records. . .provides concrete evidence often missing from larger-scale studies of how management carefully manipulated the social division of labor in its quest to control the workplace."--Enterprise & Society

"Hirsch covers broad topics so thoroughly, weaves them together with such skill, and supports her conclusions with such exhaustive research in primary and secondary sources, that the book stands as a remarkable achievement."--Maryland Historical Magazine

"Examining the developments within the Pullman Company before and especially after the events of 1894, this book constitutes an important case study in changing industrial relations in the United States."--David Montgomery, author of The Fall of the House of Labor

Susan Eleanor Hirsch is a professor emerita of history at Loyola University Chicago and the author of Roots of the American Working Class: The Industrialization of Crafts in Newark, 1800-1860.