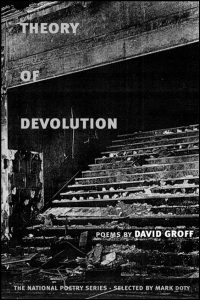 With blazing wit and a searing language, David Groff writes fiercely of erosion and endurance in this stunning debut collection. At turns fervent and elegiac, dishy and sly, these poems confront the effect of AIDS and HIV on a brotherhood that dealt firsthand with grief and loss and, later, the tenuous prospect of survival. Peopled with the spirits of dead gay men, uncertain lovers, mortal parents, and spectral friends and brothers, Groff's poems are unified by their preoccupation with what erodes us and what we can hold onto when life and love devolve.

Theory of Devolution is a book of balances: alternately passionate and restrained, headlong and meditative, engaged and knowingly detached. David Groff's territory is Chelsea and Fire Island, at the end of a nightmare crisis but nowhere near the end of an epidemic. How, in such times, to speak? These pages give voice to an ‘always-dying particular man,' examining the evidence of loss and pleasure and the deep bonds of affection in poems alive with ‘an odd crabbed pulse of beauty they refine to true detail.'" –- Mark Doty

"David Groff's poems open our attention by a subtle, unflinching love of human being. The live, known past spins sharp and fine in and out of the now of his vision. His language exhilarates." –- Marie Ponsot

"In this first collection of his poetry, Groff understands his own insignificance in this frail universe. . . . Still, he finds himself in th middle of it all, an articulate witness, a participant. These poems are reports from the hot centre, hard and honest accounts of life in the midst of a sad and deadly nightmare. . . . Groff 'loves the idea of love,' and it shows in his sweet and passionate imagery. He is sensitive but still objective, compassionate but not sentimental. From the raucous rituals of Fire Island to the settled and familial peace of Chelsea, Groff maps a world coming slowly undone." -- Library Journal

"Quietly intense, occasionally funny and almost always poignant poems. . . . [Groff] has a gift for viscerally precise language and daring metaphors. . . . What distinguishes Theory of Devolution is . . . the way images recur and recombine, accruing symbolic resonances until this gathering of poems has an overall unity much like a sequence. . . . Groff brings off a variety of tones and subtle modulations of emotion within a single lyric or narrative." -- Peter Klappert, Lambda Book Report

"Poet David Groff serves up stunning portions of honey and rue with his collected work Theory of Devolution, an emotional and frequently devastating journey through the serenity of a carefully recalled childhood, the tragedy of a Chelsea/Fire Island orbit ravaged by AIDS, and the minefields of contemporary gay life." --Gay City News 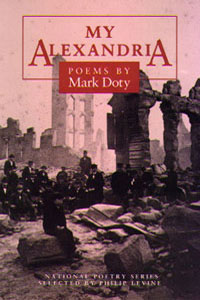