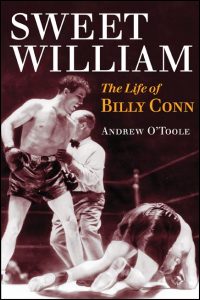 The Life of Billy Conn

An Irish working-class hero of Pittsburgh, Billy Conn captured hearts through his ebullient personality, stellar boxing record, and good looks. A light heavyweight boxing champion best remembered for his sensational near-defeat of heavyweight champion Joe Louis in 1941, Conn is still regarded as one of the greatest fighters of all time. Andrew O'Toole chronicles the boxing, Hollywood, and army careers of "the Pittsburgh Kid" by drawing from newspaper accounts, Billy's personal scrapbooks, and fascinating interviews with family. Presenting an intimate look at the champion's relationships with his girlfriend, manager, and rivals, O'Toole compellingly captures the personal life of a public icon and the pageantry of sports during the 1930s and '40s.

"The rough-and-tumble sports world of the late 1930s and early 1940s emerges vividly, as O'Toole describes the way mobsters infiltrated the fight game and how Conn needed the help of Pittsburgh Steeler owner Art Rooney to stay clear of the unsavory types. Conn, though not widely known today, was a beloved, blue-collar American hero in his era, and O'Toole masterfully re-creates both the life and the times. For all fans of boxing history."--Booklist

“Before Roberto Clemente, Terry Bradshaw, or Mario Lemieux became household names, Billy Conn was Pittsburgh’s most famous athlete. In Andrew O’Toole’s Sweet William: The Life of Billy Conn, the East Liberty-born boxer’s career is examined, and there’s much to enjoy. O’Toole is a thorough chronicler, but the best parts of the book are the colorful backroom stories that seem to be intrinsic to boxing lore."--Pittsburgh Tribune-Review

"Unapologetic, fearless and uncompromising: That's the Billy Conn, and that's the city of Pittsburgh, that O'Toole portrays in Sweet William. The book is a great read for sports fans and local historians alike. Family dustups notwithstanding, Conn is the 'Pittsburgh Kid' that Pittsburgh kids should learn about and look up to."--Pittsburgh City Paper

"A rich, solid book. . . .The author has a command of the mores of both the street and the seamy life of smalltime boxing; thus the reader does indeed see a slice of 'sport in society' as told through experience, interviews, and newspaper accounts rather than the colder eye of a historian. . . . This book is best suited to scholars and fans in search of an authentic voice. Recommended."--Choice

"Sweet William compellingly captures the personal life of a public icon--and beloved lifelong Pittsburgh resident--and the pageantry of American sports during the 1930s and 1940s."--Pennsylvania Heritage

"A masterful biography of Billy Conn. . . . An excellent portrayal of the Golden Age of boxing."--Pennsylvania Magazine of History and Biography

"As no one else has, O'Toole writes extensively and revealingly about [Conn's life]."--Pittsburgh Post-Gazette

"More than just a biography, Sweet William is a sweeping portrayal of an era just before, during, and after World War II when boxing was in its Golden Age. Andrew O'Toole brilliantly captures the essence of the many unique characters of the time, including the dashing, handsome, fearless Billy Conn, the Pittsburgh Kid, whose colorful personality would have made him a celebrity in any era. The book includes his odyssey from the smoke-filled environs of Pittsburgh to New York's famed Jacobs Beach where the enigmatic Conn became the greatest light heavyweight champion of all time."--Angelo Prospero, boxing writer and historian

"In Sweet William, Andrew O'Toole takes you to the streets of Pittsburgh and New York prior to World War II. You can't help but feel the sweat, feel the struggle, and get caught up in the glamour. It's a superb piece of storytelling—and an important book about an important fighter from boxing's Golden Age."--Russell Sullivan, author of Rocky Marciano: The Rock of His Times

Andrew O'Toole is the author of several books on sports, including Paul Brown: The Rise and Fall and Rise Again of Football's Most Innovative Coach, Smiling Irish Eyes: Art Rooney and the Pittsburgh Steelers.