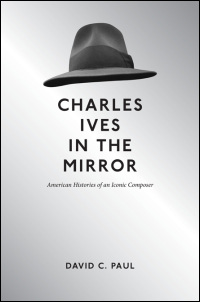 Charles Ives in the Mirror

American Histories of an Iconic Composer

American composer Charles Ives (1874–1954) has gone from being a virtual unknown to become one of the most respected and lauded composers in American music. In this sweeping survey of intellectual and musical history, David C. Paul tells the new story of how Ives's music was shaped by shifting conceptions of American identity within and outside of musical culture, charting the changes in the reception of Ives across the twentieth century and into the twenty-first century. Paul focuses on the critics, composers, performers, and scholars whose contributions were most influential in shaping the critical discourse on Ives, many of them marquee names of American musical culture themselves, including Henry Cowell, Aaron Copland, Elliott Carter, and Leonard Bernstein.

Paul explores both how Ives positioned his music amid changing philosophical and aesthetic currents and how others interpreted his contributions to American music. Although Ives's initial efforts to find a public in the early twenties attracted a few devotees, the resurgence of interest in the American literary past during the thirties made a concert staple of his "Concord" Sonata, a work dedicated to nineteenth-century transcendentalist writers. Paul shows how Ives was subsequently deployed as an icon of American freedom during the early Cold War period and how he came to be instigated at the head of a line of "American maverick" composers. Paul also examines why a recent cadre of scholars has beset the composer with Gilded Age social anxieties.

By embedding Ives' reception within the changing developments of a wide range of fields including intellectual history, American studies, literature, musicology, and American politics and society in general, Charles Ives in the Mirror: American Histories of an Iconic Composer greatly advances our understanding of Ives and his influence on nearly a century of American culture.

"The depth of Paul's historical perspective speaks for itself."--Gramophone

"An engaging and comprehensive account of the reception history of Charles Edward Ives. . . .The book will undoubtedly become an essential tool for the study of Ives."-- Choice

“Paul has crafted an ambitious intellectual history, putting Ives at the centre of diverse forces, including the history of twentieth-century composition, the legacy of transcendentalism, the cultural marketing of the Cold War and the rise of American Studies and American Musicology. This is not a book about Ives’s music or his life, but rather a meta history that focuses on the composer’s advocates, critics and chroniclers. Essentially, it probes the complex ways in which a gifted creative artist achieves broad-based fame, and then, in a sense, becomes public property—a figure to be reviled or adored or forgotten as time marches on.”—Times Literary Supplement

"David Paul's interest lies with how Ives's reflection is colored by the viewpoints of other Americans. He has written the first book-length reception history of the composer since his relatively recent passing in 1954. . . . He asks his readers to embrace and even celebrate subjectivity, both in their understanding of Ives as a historical figure and universally in history at large."--Notes

"By virtue of its depth of insight, its wide remit, and its succinct yet highly detailed presentation, this remarkable book is a considerable addition to the existing scholarship on this most fascinating of musical figures."--David Nicholls, author of John Cage

"An outstanding work. Until now no one has created, in a single narrative, the story of how Charles Ives' music moved from the far outer fringes to the central core of American musical culture, and David Paul has done this in an exemplary manner. It is a tour-de-force in both its breadth and its insights."--Michael Broyles, author of Beethoven in America

Publication of this book was supported by AMS 75 PAYS Endowment of the American Musicological Society, funded in part by the National Endowment for the Humanities and the Andrew W. Mellon Foundation, and by a grant from the Henry and Edna Binkele Classical Music Fund.

David C. Paul is an assistant professor of musicology and theory at the University of California, Santa Barbara.