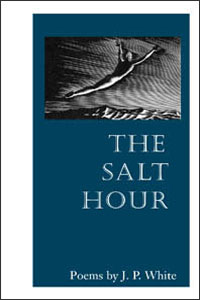 With this dazzling collection, J. P. White embarks on a windswept journey through seductive, treacherous waterways. Conveying a stormy sense of place defined less by geography than by the push and pull of the mind at odds with circumstance, these bracing poems plumb the depths of the sea and of the human heart in muscular, graceful language.

The Salt Hour wends its way from Lake Erie to the Sea of Cortez, from the Aegean Sea to ice-choked Baffin Bay. From old sailors on the graveyard watch to a young boy clinging to the sailboat's pulpit to boats dousing their sails before the blue-black storm, The Salt Hour evokes the very salt breath of the sea and the poet's need for connection with the shore. As a restless traveler who takes us from England and Russia to Nicaragua and the Caribbean, White pushes beyond the boundaries of the lyric/narrative tradition to let more of the world, more flux of the larger human condition rush in.

Drenched in color almost achingly vivid, The Salt Hour is an extraordinary catch.

"J.P. White is a poet of grace, authority, and accomplishment . . . again and again [he] arrives at the hard-word eloquence from which the most enduring lyrics must be formed. White is also a richly various poet, elegiac, political, and literary by turns. . . . The Salt Hour/i>is a very fine collection indeed." -- David Wojahn

"White writes about his world and makes it relevant to anyone who reads his poetry. And even when he refers to a well-known poet from the past, White's words can be clearly understood by all who struggle through this 'one salt hour between two eternities.'" -- Charles Johnson, Home News Tribune, East Brunswick, New Jersey

"Abundant with beaches, sails, and spray, these poems celebrate both the seductiveness and the destructive power of the sea, letting the fact of its unpredictability become a metaphor for human behavior." -- ForeWord

J. P. White's previous poetry collections are In Pursuit of Wings and The Pomegranate Tree Speaks from the Dictator's Garden. His work has appeared in Boulevard, the New Republic, North American Review, Sewanee Review, and other journals.