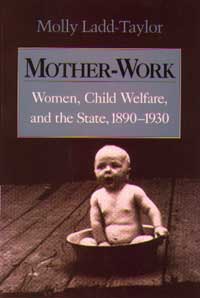 The changing nature of motherhood at home and in society

Early in the twentieth century, maternal and child welfare evolved from a private family responsibility into a matter of national policy. Molly Ladd-Taylor explores both the private and public aspects of child-rearing, using the relationship between them to cast new light on the histories of motherhood, the welfare state, and women's activism in the United States.

Ladd-Taylor argues that mother-work, "women's unpaid work of reproduction and caregiving," motivated women's public activism and "maternalist" ideology. Mothering experiences led women to become active in the development of public health, education, and welfare services. In turn, the advent of these services altered mothering in many ways, including the reduction of the infant mortality rate.

"The essential guide to the politics of motherhood during a crucial period in the history of American women and the incipient welfare state."--Sonya Michel, editor of Mothers of a New World: Maternalist Politics and the Origins of Welfare States

Molly Ladd-Taylor is a professor of history at York University, Toronto. She is the author of Fixing the Poor: Eugenic Sterilization and Child Welfare in the Twentieth Century and a coeditor of Women, Health and Nation: Canada and the United States Since 1945.