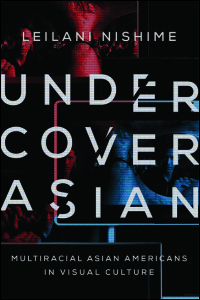 In this first book-length study of media images of multiracial Asian Americans, Leilani Nishime traces the codes that alternatively enable and prevent audiences from recognizing the multiracial status of Asian Americans. Nishime's perceptive readings of popular media--movies, television shows, magazine articles, and artwork--indicate how and why the viewing public often fails to identify multiracial Asian Americans. Using actor Keanu Reeves, golfer Tiger Woods, and the television show Battlestar Galactica as examples, Nishime suggests that this failure is tied to gender, sexuality, and post-racial politics. In contrast to these representations, Nishime provides a set of alternative moments when audiences can view multiracial Asians as multiracial. Through a consideration of the Matrix trilogy, reality TV star Kimora Lee Simmons, and the artwork of Kip Fulbeck, these examples highlight both the perils and benefits of racial visibility, uncovering our society's ways of constructing racial categories. Throughout this incisive study, Nishime offers nuanced interpretations that open the door to a new and productive understanding of race in America.

"Nishime makes a compelling argument for productive possibilities in the way that we understand multiracial bodies and narratives. This fascinating, elegant book provides a model for doing this kind of analysis and creating new narratives so that these possibilities may one day be realized."--Feminist Media Studies
,br>"In the case of Undercover Asian, Nishime's critical intervention cannot be overstated. Her book compels readers to see multiracial Asian Americans, to understand their function in discourses of popular culture, to contextualize the place of multiracial Asian Americans in contemporary society, and to challenge our ideas of race and racialization."--Asian Diasporic Visual Cultures and the Americas

"Nishime's persuasive, well-grounded analysis yields genuinely brilliant insights regarding the pitfalls and possibilities of multiracial visibility in contemporary media culture. Lucidly written with appealing attention to popular texts, this is the sort of book that moves multiracial and Asian American studies in interesting and engaging new directions."--Glen Mimura, author of Ghostlife of Third Cinema: Asian American Film and Video

Leilani Nishime is an assistant professor of communications at the University of Washington and the coeditor of East Main Street: Asian American Popular Culture.

Edited, with an Introduction and Notes, by Greg Robinson