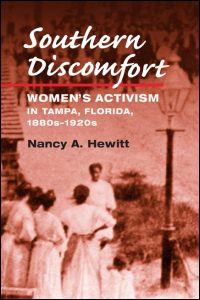 A history of multiracial women’s activism in Tampa's cigar factories

Linked to the Caribbean and southern Europe as well as to the Confederacy, the Cigar City of Tampa, Florida, never fit comfortably into the biracial mold of the New South. Nancy A. Hewitt explores the interactions among distinct groups of women--native-born white, African American, Cuban and Italian immigrant women--that shaped women's activism in the vibrant, multiethnic city.

Hewitt emphasizes the process by which women forged and reformulated their activist identities from Reconstruction through the U.S. declaration of war against Spain in April 1898, the industrywide cigar strike of 1901, and the emergence of progressive reform and labor militancy. She also recasts our understanding of southern history by demonstrating how Tampa's triracial networks alternately challenged and re-inscribed the South's biracial social and political order.

"A splendid piece of work: rich in detail, soundly reasoned, and provocative in its implications for social historians' debates about identity. Hewitt's lucid, engaging prose makes the book a particularly good one for use in undergraduate classrooms, but specialists will also find it a most valuable read."--Journal of American History

"Enriches our understanding of women and gender in urban history through [the] astute analys[is] of women as key public actors and cultural symbols in the emerging city of Tampa."--Urban History

Nancy A. Hewitt is an emerita professor of history and women's studies at Rutgers University. She is the author of Women's Activism and Social Change: Rochester, New York, 1822-1872 and coeditor of Visible Women: New Essays on American Activism.