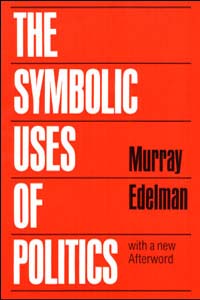 The Symbolic Uses of Politics

The symbolic manifestations, purposes, and uses of politics are revealed in this provocative analysis of the institution of politics and man as a political animal.

Unlike the conventional study of politics that deals with how people get the things they want through government, this book concentrates on how politics influence what they want, what they fear, and what they regard as possible. In examining politics as a symbolic form, it looks at man and politics as reflections of each other.

"Written with clarity and preciseness uncommon in the social sciences, . . . The Symbolic Uses of Politics is a classic statement of a theme whose importance is inescapable."--The Activist

"This is a truly social-psychological study of politics, done in an unconventional, imaginative, and appealing style."--Annals of the American Academy of Political and Social Science

Murray Edelman is professor of political science at the University of Illinois. His other works include The Licensing of Radio Services in the United States, 1927-1947 and, with Robben W. Fleming, The Politics of Wage-Price Decisions, 1946-1963: A Four-Country Analysis.