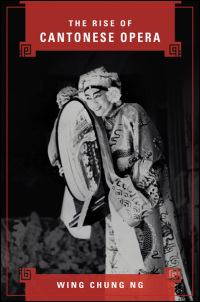 The Rise of Cantonese Opera

In the early 1900s, however, Cantonese opera began to capture mass audiences in the commercial theaters of Hong Kong and Guangzhou--and changed forever. Wing Chung Ng charts Cantonese opera's confrontations with state power, nationalist discourses, and its challenge to the ascendancy of Peking opera as the country's preeminent "national theatre." Mining vivid oral histories and heretofore untapped archival sources, Ng relates how Cantonese opera evolved from a fundamentally rural tradition into a form of urbanized entertainment distinguished by a reliance on capitalization and celebrity performers. He also expands his analysis to the transnational level, showing how massive waves of Chinese emigration to Southeast Asia and North America further re-shaped Cantonese opera into a vibrant part of the ethnic Chinese social life and cultural landscape in the many corners of a sprawling diaspora.

An engaging examination of a global phenomenon, The Rise of Cantonese Opera rewrites the political, artistic, and economic history of an art form and an industry.

"Ng's well-researched study addresses the rise in popularity of Cantonese opera in the early 20th century, tracing its origins in popular rural entertainment, the influence on it of Peking Opera, and its subsequent growth among the urban population. In showing the sociopolitical discourses that complicated this trajectory, Ng masterfully incorporates oral histories to reveal how the genre impacted not only the artistic, cultural, and ethnic spheres, but also the political and economic aspects of Cantonese society. . . . Ng writes in an engaging style, and he includes a comprehensive bibliography and footnotes. Recommended."--Choice

"A distinctive new contribution to our understanding not only of Cantonese opera itself but of the social conditions impacting Chinese theater more widely in the first half of the twentieth century. . . . Ng's account is distinctive in coverage, and he makes a clear demonstration of the rich potential source materials available to the researcher of China's manifold opera traditions and its recent history. His focus on Cantonese opera in transnational perspective is a particularly timely extension of existing knowledge, one that encourages us to take seriously the longer history of the Chinese arts on a global level."--China Review International

"A comprehensive and colorful picture of the birth and growth of what we know as Cantonese opera today. I applaud his achievement."--Daphne Lei, author of Alternative Chinese Opera in the Age of Globalization: Performing Zero

"Benefits greatly from the extensive use of a rich array of previously untouched archival materials and periodicals. The extraordinary strength of its source materials makes it unique. Rich and comprehensive."--Nancy Rao, Rutgers University

"Delightfully original scholarship. By following its movements over a vast geographical expanse and delving deep into neglected aspects of its operation--such as business organization--Ng offers a fresh, new understanding of Cantonese opera. His masterly narration and analysis of the subject on the local, regional, national and transnational levels reveal, for the first time, its extraordinary complexity. This work raises the bar for future studies of Chinese opera; indeed, of other genres of the performing arts."--Elizabeth Sinn, author of Pacific Crossing: California Gold, Chinese Migration, and the Making of Hong Kong

Born and raised in Hong Kong, Wing Chung Ng is a professor of history at the University of Texas at San Antonio and author of The Chinese in Vancouver, 1945-80: The Pursuit of Identity and Power.