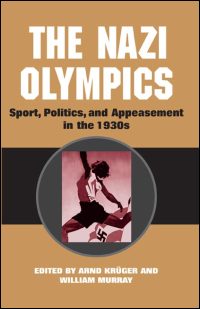 The 1936 Olympic Games played a key role in the development of both Hitler’s Third Reich and international sporting competition. The Nazi Olympics gathers essays by modern scholars from prominent participating countries and lays out the issues--sporting as well as political--surrounding the involvement of individual nations.

The volume opens with an analysis of Germany’s preparations for the Games and the attempts by the Nazi regime to allay the international concerns about Hitler’s racist ideals and expansionist ambitions. Essays follow on the United States, Great Britain, and France--top-tier Olympian nations with misgivings about participation--as well as Germany's future Axis partners Italy and Japan. Other contributions examine the issues involved for Finland, Sweden, Norway, Denmark, and the Netherlands. Throughout, the authors reveal the high political stakes surrounding the Games and how the Nazi Olympics distilled critical geopolitical issues of the time into a spectacle of sport.

"It's a pleasure to read the work of writers who really know their topic. This collection contains some masterful essays which impress the reader with their depth of information and their balanced judgments. There's real drama here and important questions to ask and answer."--Allen Guttmann, author of The Olympics: A History of the Modern Games

Arnd Krüger is a professor of sport science and head of the Sport and Society Section at Georg-August Universität, and the author of more than twenty books. He is also a former Olympian and has served as president of the European Committee for the History of Sports. William Murray is a reader in history at La Trobe University and the author of The World's Game: A History of Soccer and The Old Firm: Sectarianism, Sport, and Society in Scotland.