Winner of the Anisfield-Wolf Award, 1995. Winner of the Ralph J. Bunche Award, American Political Science Association, 1995. Outstanding Book from the Gustavus Myers Center for the Study of Human Rights in North America.

Unlike other critiques of the scientific literature on racial difference, The Science and Politics of Racial Research argues that there has been no scientific purpose or value to the study of innate differences in ability between groups. William Tucker shows how, for more than a century, scientific investigations of supposedly innate differences in ability between races have been used to rationalize social and political inequality as the unavoidable consequence of natural differences.

Tucker structures his work chronologically, with each chapter describing how research on genetic difference was used in a particular era to support a particular political agenda. He begins with the use of science to support slavery in the mid-nineteenth century and ends with the effects of Jensenism in the 1970s. Highlights include one chapter describing a little-known but concerted attempt by a group of scientists to overturn the Brown v. Board of Education decision on the basis of "expert testimony" about racial differences, and another that presents a review of the eugenics movement in the twentieth century. The author also considers how to balance the rights and responsibilities of scientists, concluding that one generally neglected method is to strengthen the rights of research subjects.

"An antidote to that much-publicized book, The Bell Curve.. . . Take a couple chapters and call Jesse Helms in the morning."--National Catholic Reporter

"Tucker's well-researched discussions show the intensity of the ideological struggles to prove racial differences in ability and IQ, and they contextualize recent books, such as Charles Murray and Richard Herrnstein's The Bell Curve, that continue this scientific racism."--J. R. Feagin, Choice

"A splendid book, indeed, the best of many admirable books. . . . Will do a great deal of good in the world."--Ashley Montagu

"Anybody reading The Bell Curve should read The Science and Politics of Racial Research."--George Armelagos, Emory University

"Even scholars well-versed in the study of race will be shocked at Tucker's disclosure of the extent to which research on race and psychology has been motivated by political considerations in the U.S. and Europe."--Lewis H. Killian, author of Black and White: Reflections of a White Southern Sociologist

William H. Tucker is a professor of psychology at Rutgers University-Camden. He is the author of The Cattell Controversy: Race, Science, and Ideology and The Funding of Scientific Racism: Wickliffe Draper and the Pioneer Fund. 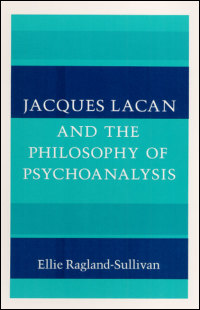 Jacques Lacan and the Philosophy of Psychoanalysis