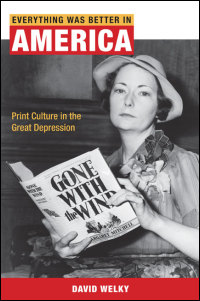 Everything Was Better in America

Print Culture in the Great Depression

As a counterpart to research on the 1930s that has focused on liberal and radical writers calling for social revolution, David Welky offers this eloquent study of how mainstream print culture shaped and disseminated a message affirming conservative middle-class values and assuring its readers that holding to these values would get them through hard times. Through analysis of the era's most popular newspaper stories, magazines, and books, Welky examines how voices both outside and within the media debated the purposes of literature and the meaning of cultural literacy in a mass democracy. He presents lively discussions of such topics as the newspaper treatment of the Lindbergh kidnapping, issues of race in coverage of the 1936 Olympic games, domestic dynamics and gender politics in cartoons and magazines, Superman's evolution from a radical outsider to a spokesman for the people, and the popular consumption of such novels as the Ellery Queen mysteries, Gone with the Wind, and The Good Earth. Through these close readings, Welky uncovers the subtle relationship between the messages that mainstream media strategically crafted and those that their target audience wished to hear.

“A launching pad for students’ own exploration of values projected by mass media both today and in the past.”--Journalism & Mass Communication Quarterly

“Provides a timely examination of the tension between conservative tendencies in the publishing business and the progressive liberalism that resulted from widespread disillusion directed at the capitalist system.”--American Historical Review

“A welcome addition to the history of twentieth-century print culture, one that teachers and students of American studies will find useful and thought-provoking.”--Journal of American Studies

"A significant contribution to our knowledge of everyday media culture and its relationship to change and stability at a pivotal moment in American history."--Journalism

"A welcome reminder of how much of the mainstream media reacted to the Depression by seeking to reaffirm platitudes about American democracy, individualism, and traditional values."--American Studies

"Everything Was Better in America reminds us that most people reacted to the Great Depression not by stepping off a ledge, robbing a bank, or joining the Communist Party. Most often Americans responded to the crisis in culturally conservative ways, reconfiguring and reasserting old national beliefs and dreams. David Welky has read deeply in the newspapers and magazines and comic books of the 1930s, and through them, gives us a fascinating portrait of the era with important insights about culture and history. This is fine history and a good read."--Elliott J. Gorn, Brown University

"General readers will find the discussion of topics such as Superman, Gone with the Wind, Ellery Queen, and the Lindbergh baby fascinating. Everything Was Better in America is also an excellent choice for classes on twentieth-century America, especially those focusing on the Depression."--Steven Riess, author of Touching Base: Professional Baseball and American Culture in the Progressive Era

David Welky is a professor of history at the University of Central Arkansas. His books include A Wretched and Precarious Situation: In Search of the Last Arctic Frontier.