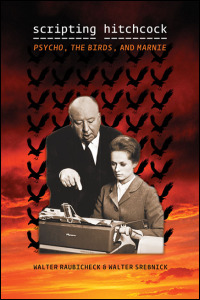 Psycho, The Birds, and Marnie

Nominated for an Edgar Allan Poe Award from the Mystery Writers of America in the category of Best Critical/Biographical, 2012.

Scripting Hitchcock explores the collaborative process between Alfred Hitchcock and the screenwriters he hired to write the scripts for three of his greatest films: Psycho, The Birds, and Marnie. Drawing from extensive interviews with the screenwriters and other film technicians who worked for Hitchcock, Walter Raubicheck and Walter Srebnick illustrate how much of the filmmaking process took place not on the set or in front of the camera, but in the adaptation of the sources, the mutual creation of plot and characters by the director and the writers, and the various revisions of the written texts of the films.

Hitchcock allowed his writers a great deal of creative freedom, which resulted in dynamic screenplays that expanded traditional narrative and defied earlier conventions. Critically examining the question of authorship in film, Raubicheck and Srebnick argue that Hitchcock did establish visual and narrative priorities for his writers, but his role in the writing process was that of an editor. While the writers and their contributions have generally been underappreciated, this study reveals that all the dialogue and much of the narrative structure of the films were the work of screenwriters Jay Presson Allen, Joseph Stefano, and Evan Hunter. The writers also shaped American cultural themes into material specifically for actors such as Janet Leigh, Tippi Hedren, and Tony Perkins. This volume gives due credit to those writers who gave narrative form to Hitchcock's filmic vision.

"This wonderful, sensible study should be devoured by film students of all ages. Highly recommended."--Choice

"A gracefully conceived study of the role of the scriptwriter in three key works from Hitchcock's later career. Convincingly substantiating received wisdom about Hitchcock's working methods, Raubicheck and Srebnick enhance our understanding of collaborative authorship--a topic that is important not only for the study of Hitchcock but for the field as a whole."--Richard Allen, professor of cinema studies, New York University