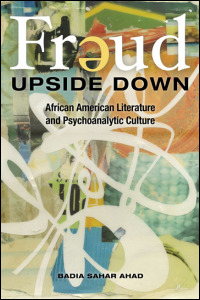 A salient take on psychoanalysis as a cultural phenomenon, intersecting with African American literature

Freud Upside Down explores the relationship between these authors and intellectuals and the psychoanalytic movement emerging in the United States over the course of the twentieth century. Examining how psychoanalysis has functioned as a cultural phenomenon within African American literary intellectual communities since the 1920s, Ahad lays out the historiography of the intersections between literature and psychoanalysis and considers the creative approaches of African American writers to psychological thought in their work and their personal lives.

"Freud Upside Down showcases a theoretical sophistication that opens up exciting archives to a new take on literary and intellectual history." --Michael L. Cobb, author of God Hates Fags: The Rhetorics of Religious Violence

Badia Sahar Ahad is an assistant professor of English at Loyola University.