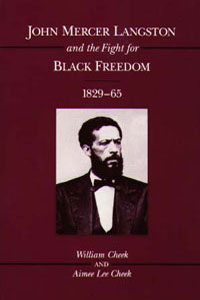 John Mercer Langston and the Fight for Black Freedom, 1829-65

Outstanding Book given by the Gustavus Myers Center for the Study of Human Rights in the United States.

Privileged beyond other members of his race, yet sharing their disadvantages, the young John Mercer Langston stood in an uncertain position in the years before the Civil War. His confrontation with a critical personal question was tempered by a crucial national reality: from what sources could he derive his model of manhood and human dignity? This book explores John Mercer Langston's decisions to work out his destiny through the resources and fortunes of the northern black community.

Although Langston, who died in 1897, was a black Politician, orator, lawyer, intellectual, diplomat, and congressman, he has never before been accorded fullscale biographical treatment. Born free on a Virginia plantation, Langston graduated from Oberlin College in 1849, gained admission to the Ohio bar, and by the age of twenty-five, became the first black American to hold elective office. Still in the years of his political apprenticeship, he promoted black civil rights, helped shape the nascent Republican party, aided in the Oberlin-Wellington Rescue and John Brown's raid, and recruited black soldier for the Union cause. In 1864 he became the first president of the National Equal Rights League.

From an extensive search of primary sources, the authors construct a richly textured picture of the beginnings of Langston's career as a national black leader. More than a biography, the work also incorporates social and political history. Embedded firmly in a study of northern black community life and activism, it reveals the degree to which Langston and his cohorts set the terms of the fight for freedom and citizenship.

William Cheek is professor of history at San Diego State University and author of Black Resistance before the Civil War. Aimee Lee Cheek is a writer and consultant in San Diego.